Waiting on Wednesday: The Pledge by Kimberly Derting 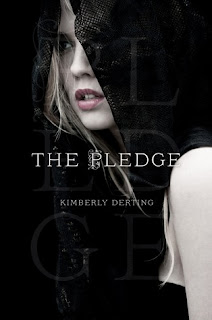 In the violent country of Ludania, the classes are strictly divided by the language they speak. The smallest transgression, like looking a member of a higher class in the eye while they are speaking their native tongue, results in immediate execution. Seventeen-year-old Charlaina has always been able to understand the languages of all classes, and she’s spent her life trying to hide her secret. The only place she can really be free is the drug-fueled underground clubs where people go to shake off the oppressive rules of the world they live in. It's there that she meets a beautiful and mysterious boy named Max who speaks a language she's never heard before . . . and her secret is almost exposed.

Charlie is intensely attracted to Max, even though she can’t be sure where his real loyalties lie. As the emergency drills give way to real crisis and the violence escalates, it becomes clear that Charlie is the key to something much bigger: her country’s only chance for freedom from the terrible power of a deadly regime.

Greta is Erikasbuddy said…
Looks like there is a lot of excitement building over this book today.

Obsession with Books said…
I have seen this on a few sites now, a great pick!

Ynysawdre Elderly Residents Association said…
I am going to check if I already have this on my wishlist - if not it is going on there lol. Stop tempting me with delicious books ;D
26 May 2011 at 10:54