May 03, 2011
Infinity by Sherrilyn Kenyon
Published by Atom
Series: The Chronicles of Nick
Source: Sent to me by my lovely blogging friend Clover. 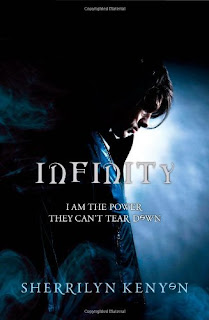 At fourteen, Nick Gautier thinks he knows everything about the world around him. Streetwise, tough and savvy, his quick sarcasm is the stuff of legends. . .until the night when his best friends try to kill him. Saved by a mysterious warrior who has more fighting skills than Chuck Norris, Nick is sucked into the realm of the Dark-Hunters: immortal vampire slayers who risk everything to save humanity. Nick quickly learns that the human world is only a veil for a much larger and more dangerous one: a world where the captain of the football team is a werewolf and the girl he has a crush on goes out at night to stake the undead. But before he can even learn the rules of this new world, his fellow students are turning into flesh eating zombies. And he’s next on the menu. As if starting high school isn't hard enough. . .now Nick has to hide his new friends from his mom, his chainsaw from the principal, and keep the zombies and the demon Simi from eating his brains, all without getting grounded or suspended. How in the world is he supposed to do that?

***
Infinity is the first book in Sherrilyn Kenyon's Young Adult series following the story of Nick.

I will freely admit that I am not entirely sure what I made of this book but I was sufficiently entertained and intrigued that I will definitely be continuing on with the series in the not too distance future. There were several things that I liked about it but almost other things that I wasn't too sure on.

I loved the main character in this book. I loved that Nick was a bit of a underdog and certainly one I could champion. I loved that he loved his mum and has this innate need to do what was right. I loved his sarcasm and how generally streetwise he was. I am looking forward to getting to see a bit more of him in the next book.

The story itself and particularly the dialogue was funny all the way through which kept making me chuckle out loud as I was reading along. There was also lots of action of the supernatural kind and an awful lot of ideas and plotlines thrown out there to be developed in future books.

The book itself was a little bit too random and at times a bit confusing. Characters popped up or things happened very quickly and I couldn't decide whether the author was deliberately throwing me in the deep end or assumed that I knew a bit more background than I in fact did. This is the main reason why I'm not sure what I think about this book.

certainly an interesting start to a series ... I wonder what it is going to do next.

Michelle Fluttering Butterflies said…
Well I'm glad you mostly enjoyed it? I've heard it's slightly confusing and just bizarre which is what put me off reading it for so long. Now I just don't have the time to commit to another series, especially as I haven't read the author's other books where this book is set!
5 May 2011 at 11:11

Ynysawdre Elderly Residents Association said…
There is an awful lot going on - I am looking forward to the 2nd book in order to learn which direction the plot is heading :D
8 May 2011 at 14:24