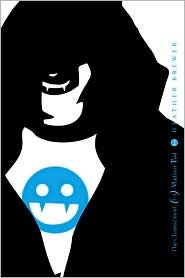 If middle school stunk for Vladimir Tod, high school is a real drain. Besides being a punching bag for bullies, he’s still stalled with dream girl Meredith, and he’s being tailed by a photographer from the school newspaper. Needless to say, practicing his vampire skills hasn’t exactly been a priority for Vlad — until now. A monumental trip to Siberia with Uncle Otis is Vlad’s crash course in Vampire 101. Training alongside the most gifted vampires is exactly what Vlad needs to sharpen those mind-control skills he’s been avoiding. And he’d better get it right, because the battle brewing back home with the slayer who’s been stalking him could be Vlad’s last


***
Ninth Grade Slays is the second offering of the Vlad Tod Chronicles and was as enjoyable and engaging as its predecessor.

It's a new year for Vlad at a new school although not that much has changed with school. He is still best friends with Henry, the bullies are still after him and using him as a punching bag and he is still completely hung up over Meredith.

Outside of school Vlad is starting to find out more and more about his vampire side and more particularly about all the things he didn't know about his father and his vampiric background. On the plus side it means he is learning more and more via his uncle Otis but on the negative side there is a Slayer in town who is out to get him. Life is never easy for poor Vlad.

I liked that this book captured the essense of book one without going over the same ground time and time again and well as moving the story on from where we left off at the end of book one. Vlad is still this awkard teenage half human half vampire who is trying to find his place in the world.

The main focus of this book is Vlad's trip to Siberia which is a bit of a journey of self discovery for him (well for his vampire half). During the trip he learns a lot about himself and his powers and gets to spend time with others of his kind. There are loads of hints of different future plotlines that come out of the trip the most significant being the one surrounding the prophecy about the identity of the Pravus, a vampire who will rule all vampires whilst enslaving and destroying the human race.

The story itself twists and turns nicely throughout the story. I liked where it took Vlad but was also quite surprised at times at different things that were revealed.

All in all a satisfying second helping of Vlad Tod. Looking forward to book 3

It’s another awful year at Bathory High for Vladimir Tod. The evil vampire D’Ablo is hunting for a ritual that could steal Vlad’s powers. His best friend, Henry, doesn’t want to be his drudge anymore. And it’s getting harder for Vlad to resist feeding on the people around him. With the threat of D’Ablo looming closer and nightmares haunting him each night, Vlad realizes that having a normal high school year is the least of his concerns. He needs to act fast, and even his Pravus powers won’t save him this time.

Tenth grade bleeds is the third instalment in the Vlad Tod chronicles.

I enjoyed this book as much as I did the first and second books in the series. Things have moved on for Vlad. he has been working on honing his vampiric abilities over the summer under the watchful eye of his uncle but it is now time for him to leave and vlad to face the world alone for the time being. For Vlad this means avoiding the variety of people who want to kill or at the very least expose him and working out the ever changing relationships he has with his friends and families.

I enjoyed seeing how things have slowly changed for vlad as he is growing into vampireness. He is struggling to deal with all the things that go with that balanced alongside all the normmal things a teenager has to deal with, dealing with classes, friends and foes. The bit that really got me was Vlad and Henry and how their relationship developed and changed as the story progressed.

What I also enjoyed about this book was that you got a bit more into the overall story. The idea of Vlad being the Pravus is explored in more detail and he still has the problem with being an outcast within his own kind and being hunted by them.

All in all this book quite nicely moves the story along a bit more and adds new ideas in. I am looking forward to seeing what happens next.

Unknown said…
I have just finished Ninth Grade. I cannot believe I am getting used to the blood as hot choc imagery lol.
Skimmed 10th Grade as I HAVE to read it lol.
26 May 2011 at 10:53

Michelle Fluttering Butterflies said…
I really enjoyed the first book but I think now that there are several books already out, I'm not feeling as excited to continue with the series :( Perhaps it's just that I have so many others to read? And when it all calms down I can go back to this series as it's so much fun.. I hope so anyway :)
6 June 2011 at 09:57