Today on the blog I have a guest review from my lovely friend John. John used to live with husband and me a few years ago (and still spends a great amount of time at our house). He is possibly the only person I know who completely gets my book obsession. He is a Harry Potter Fanatic (remember the competition on amazon a few years ago to win the chance to see the real copy of beedle the bard - he was in the top 10 worldwide for his poem about all things Harry) but is also into his fantasy novels and will have a go at anything I throw at him YA related!
Follow him on twitter
@johallo1
Visit his blog and see some of his poetry
http://johallo1.blogspot.com/
Ravenwood
By Andrew Peters 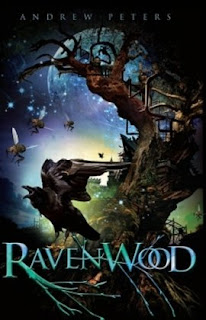 Fourteen year-old Ark has the squittiest job on Arborium, the last forested island in the future. A poor plumber’s boy, he unblocks toilets in the city where he lives – a breath-taking, mile-high world carved out of the vast upper branches of a giant canopy of trees.
He believes his forest kingdom to be the dullest but safest place on earth. But while at work, he over hears a plot between a powerful councillor of the island and a secret envoy from Maw, a superpower of glass and steel, that intends robbing Arborium of its wood, a natural resource now more precious than gold.
Ark is plunged into danger and soon he finds himself on the run, fighting for his life. Together with new found friends, he must travel from the highest tree-tops to the darkest roots of Ravenwood to save his home and his people.
********
I loved this book.  It has everything I look for in a story; a fantastical, yet somehow recognisable world that allows me to escape from my own, a world with a rich history and with epic scope and scale, with kings and palaces, gods and legends, honourable heroes and repulsive villains.  Heck - there is even a love story.
The real strength of Ravenwood though lies not in the setting, which is amazing, but in the characters that inhabit it.
The main character is Ark, a young sewage worker who may as well have had the word 'HERO' stamped on his forehead.  Such is his likability and the reader's symapthy with him, almost from the first page.  He and his friend Mucum, another great character, are forced to go on a journey to save their world, a journey neither of them is ready for and that will change them both.
Then there are the bad characters...and boy are they bad.  There is Petronio, who we are introduced to early on - son of Councillor Grasp, who is a politician intent on overthrowing the King.  As bad as the councillor is, his son is worse, yet initially I was not without sympathy for the character of Petronio who has been brought up without much love from his Father.
There are plenty of other characters that you meet along the way and they are all very well realised.  I am reluctant to go into too much detail about them for fear of giving too much away.
I always find when reading a book that there comes a point when something happens and I realise how much I care about the characters.  That certainly happened when I was reading Ravenwood and I was pleased to find I cared about them a great deal.
I found the book a little tricky for the first few chapters.  The author uses shared perspective, e.g. in a scene with two characters you are treated to the thoughts and feelings of both characters. I am used to the focus being on one, normally the hero, so I found it hard to get my head around at first.  I was also worried that this would damage the suspense as there is no mystery to the character's motivations.  This however was unfounded and in retrospect was ingenious as it helps you to feel you are getting to know all the characters, not just the main one.
I also enjoyed the use of tree related words and puns as substitute for common phrases or curse words, which kept me smiling throughout.
All in all this was a great read that I would recommend to anyone.  I dearly hope there will be more to come in this series.
Tree-mendous!

Ynysawdre Elderly Residents Association said…
Brilliant review John - anytime you would like to guest review just let me know ;D
Plus your poetry is awesome :D
15 May 2011 at 10:31

Michelle Fluttering Butterflies said…
What a wonderful guest review! This one really does sound like something I'd enjoy reading :)
25 May 2011 at 09:53