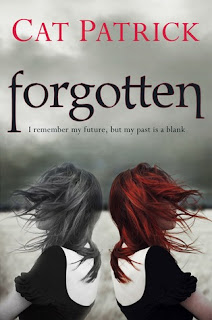 Each night when 16 year-old London Lane goes to sleep, her whole world disappears. In the morning, all that's left is a note telling her about a day she can't remember. The whole scenario doesn't exactly make high school or dating that hot guy whose name she can't seem to recall any easier. But when London starts experiencing disturbing visions she can't make sense of, she realizes it's time to learn a little more about the past she keeps forgetting-before it destroys her future.

Part psychological drama, part romance, and part mystery, this thought-provoking novel will inspire readers to consider the what-if's in their own lives and recognize the power they have to control their destinies.


***
Forgotten is a brilliantly original and awesome offering from a debut author.

London is a 16 year old girl who can remember her future in the same way others remember their past. The whole idea in itself makes for interesting reading. Often things happen around London which you as the reader know about having followed her story but she doesn't and her reactions to them are really interesting especially as she spends so much time compenstating for her problem. I loved London as a character and enjoyed following her as she tried to keep up with the world around her.

For me the best part of this story was the relationship London has with Luke. Every day she wakes up to find she has this gorgeous young man in her life and has to try to nuture and build a relationship with him even though every day it is like meeting him for the first time.

The story itself I won't go into detail about but I will say that it's really awesome. I loved the little twists that were built in as a direct result to London's condition and thought they were really cleverly done. I loved how the whole story turned out. I am actually really sad to see that it is apparently a stand alone novel as the first thought in my head when I put it down was that I wanted more.

All in all a stunningly good debut novel which is definitely worth a look.
Thank you Egmont for the review copy

Mia said…
I agree with you on London & Luke's relationship being the strongest part of the story. They were really cute and just sweet :) It was an enjoyable book overall.
31 May 2011 at 01:29

Unknown said…
Sounds like a great review- have seen this review a few times and your review definitely makes me want to pick this book up soon! I love the sound of the story and the strength of the character's relationship as well as how you mention the plot line works so well with everything.

I am fairly new to the book blogging world, how would I go about getting a review copy from Egmont?