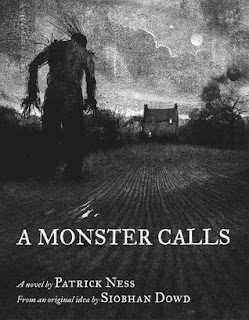 The monster showed up just after midnight. As they do. But it isn’t the monster Conor's been expecting. He's been expecting the one from his nightmare, the one he's had nearly every night since his mother started her treatments, the one with the darkness and the wind and the screaming... The monster in his back garden, though, this monster is something different. Something ancient, something wild. And it wants the most dangerous thing of all from Conor. It wants the truth.

Costa Award winner Patrick Ness spins a tale from the final idea of much-loved Carnegie Medal winner Siobhan Dowd, whose premature death from cancer prevented her from writing it herself. Darkly mischievous and painfully funny, A Monster Calls is an extraordinarily moving novel of coming to terms with loss from two of our finest writers for young adults.


***
A Monster Calls is the beautiful new offering by Patrick Ness inspired by an original idea by the late Siobhan Dowd.

The book itself is gorgeous and worth every penny just for how gorgeous the hardback edition is. The text is printed alongside illustrations which compliment the story brilliantly. They are really quite strange and not your usual illustrations but they work perfectly alonside the story being told.

The story itself follows Conor a young boy whose mother is being treated for cancer who is being visited by a Monster at night. The Monster wants the most scary thing of all from Conor. He wants the truth. He visits Conor and tells him tales but says that on his last visit he wants a story from Conor and it has to be the truth. The story Conor has to tell is a heart wrenching tale which will continue to play on your mind long after you've finished reading it.

I loved Conor's voice throughout this book. He is so innocently raw throughout the tale and is always trying to help out his mum and do his best for her. I have my own theory about the monster and what it represented in the story but that's something I won't tell you about because I wouldn't want to spoil this marvellous little book for anyone.

All in all a beautifully heartbreaking little tale which will make you both laugh and cry.

Thank you Walker Books for the beautiful review copy

Mel said…
I adored Patrick Ness's Chaos Walking trilogy - it was one of the most moving and thought provoking books I've ever read. I'm really excited about this book and I'm glad to see that Ness has managed to get the emotion and what-if's across again - can't wait to start reading it! :)
5 May 2011 at 08:45

Michelle Fluttering Butterflies said…
I have a copy of this book staring at me, calling my name, but I'm on a mission to work through several other review books I've had for ages before I can treat myself with this one.

Beth S. said…
I've been hearing such amazing things about this book the past few days. Now I am absolutely impatient to read it!
7 May 2011 at 01:27