Review: The Game by Krystyna Kuhn

May 17, 2011
The Game by Krystyna Kuhn
Published by Atom
Source: Review copy 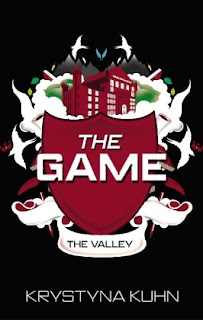 The famous Grace College, located in a remote valley in the Canadian Rocky Mountains, is an elite school for the highly gifted. But to Julia and her brother, it's a much-needed escape. But when they stumble upon a dead body their first week they'll learn they can only run so far from their past. And that the valley has secrets of its own...

The Game was a book I was sent for review having heard nothing about the author or the book itself before and I really don't know why both aren't more well known because it was a well written and interesting read.

The Game is set in a mysterious college in a very isolated setting in the Canandian Mountains. I loved the setting as it made the goings on a little bit creepier for being set in such a remote location with such a small host of characters. I got to the point where I was suspicious of everyone and even thought there might be something more going on.

Another thing this book does well is its characters. The main characters Julia and Robert are interesting in themselves as it is clear that there is something a bit sinister lurking in their past and one of the best bits of this book was how their past was unravelled as the book when on. The other characters you meet were also good and written well with all their little quirks (like the bald but beautiful girl who lives with Julia and the boy who lives with Robert who constantly has a camera in his hand).

Don't expect to have all the answers straight away as the whole thing doesn't finally click into place until the very end but is very satisfying by the time you get there. A must read for anyone who likes mysteries or boarding school dramas (or both rolled into one!) with an and engaging storyline which will keep you guessing.

Unknown said…
Thanks for spotlighting this one it sounds interesting.
19 May 2011 at 09:21