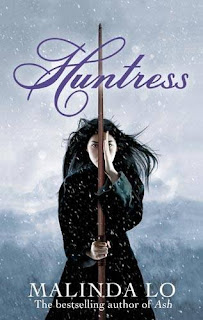 Nature is out of balance in the human world. The sun hasn't shone in years, and crops are failing. Worse yet, strange and hostile creatures have begun to appear. The people's survival hangs in the balance.
To solve the crisis, the oracle stones are cast, and Kaede and Taisin, two seventeen-year-old girls, are picked to go on a dangerous and unheard-of journey to Tanlili, the city of the Fairy Queen. Taisin is a sage, thrumming with magic, and Kaede is of the earth, without a speck of the otherworldly. And yet the two girls' destinies are drawn together during the mission. As members of their party succumb to unearthly attacks and fairy tricks, the two come to rely on each other and even begin to fall in love. But the Kingdom needs only one huntress to save it, and what it takes could tear Kaede and Taisin apart forever.

Huntress is a loose prequel of Malinda Lo's Ash set in the same world but several centuries before.

If I had to sum this book up in a sentence I would say it is fantasy adventure with kick-ass girls as leads. I found it to be a brilliantly easy read in that I wasn't bored at any point and I always wanted to know what happened next.

This was a funny book choice for me. I'm not into fantasy novels at all and I don't really like anything to do with fey but I really enjoyed this one. The story had a feel of the first lord of the rings book in its content (even though it is actually nothing like it). A band of heroes had been put together to go on an important adventure. The adventure itself involved an epic journey which was full of peril and the leads met an abundance of other characters who were all interesting in different ways. In the end the journey turns out to be of dire importance to the survival of the kingdom.

The book had two main leads, Kaede and Taisin two teenage girls who are required by their king to go on a journey to the neighbouring fairy kingdom where so few people had been that the area between the two kingdoms is relatively uncharted. The girls are joined by the King's son and his personal guards. I enjoyed meeting both the main characters and I loved how they both felt differently about their journey. Their relationship developed as the story progressed, with both of them fighting how they felt about one another, to something quite special.

It is another review where I am not going to go into detail about the plot but I will say that I enjoyed following the twists and turns of their adventure and the tale did get rather nailbiting at times as you started to wonder what the characters were going to do and how they were going to get out of the situations they found themselves in.

All in all a refreshingly different fantastical YA adventure which I would definitely recommend.
Thank you Atom for the review copy

Michelle Fluttering Butterflies said…
Something about Ash didn't grab me on an emotional level, but I'm still really interested in reading this one. Great review :)
6 May 2011 at 08:19

Karen C said…
Sounds pretty darned good. I've got Ash on my shelf and I'm definitely looking forward to picking this one up too. Now I'm wondering if I need to read this one first. I'm never sure with prequels.
7 May 2011 at 12:42