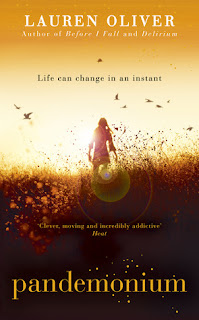 I loved the time split narrative focusing on the Lena of now (set in the future from where delerium ended) and then (set immediately after delerium finished). I found this method of story telling really intriguing as it meant you once again weren't quite sure about what was going on and the world around you which isn't something I associate with second books in a series.

There were several things I loved about this book

Now
I liked seeing the actions of Lena in the role of  the 'double agent' and how she was used was used to gather info on the valids.
I loved the relationship between Lena and Justin and seeing how it developed especially considering how distrustful they are of each other in the first instance.
The relevations about Lena's mum just blew me away.

Towards the end of the book the two narraritive meet each other in the middle and merge into the same story. I absolutely loved the ending and cannot wait to see where things go next (as a word of warning don't flick through this book ahead of where you are reading as you will spoilt it for yourself!)

An awesome read. I can't honestly say that I know of a second in a trilogy book which is stronger than the first book except this one. I cannot wait for the final book.

Unknown said…
I cant say I was that taken with Delirium but if you say this is stronger then I think I HAVE to read it
6 March 2012 at 14:31