Review: The Killables by Gemma Malley

March 05, 2012
The Killables by Gemma Malley
Published by Hodder 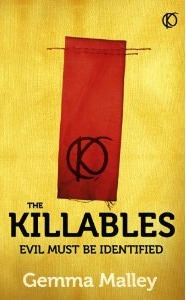 THE KILLABLES is set in the year 2065 and follows Evie and Raffy who work for the government in a society where evil no longer exists. After a war on terror that almost destroyed the world, The City has been established, where brain surgery removes the potential for evil thought and citizens are labelled on The System according to how 'good' they are. Evie and Raffy are both System operators and discover a mistake when an academic has been labelled a K, the label given to dangerous criminals. But as they investigate further they discover that it wasn't a mistake; that The City has secrets and a dark side that the government will hide at all costs. They are horrified to discover that 'K' stands for 'Killable' - the state's mark of death. And then Evie gets another K report to change on the System. Only this time it's for Raffy...


***
I am going to start by saving that I love Gemma Malley so I'm probably a bit biased in this review because I was so glad to finally get my hands on a copy of this.

The Killables is a dystopian vision of a world where Evil is eradicated from society and people are labelled according to their goodness.

The story centres around Evie and Raffy. Evie is matched to Lucas but in love with his brother Raffy. Evie is torn between the idea of being good and serving society as best as she can. She goes to work and follows the rules as best she can until Raffy does something that means society decide they are going to reclassify him as a K. Without hesitation she decides to take Lucas's offer of help to get out of the city with Raffy and try and find somewhere safe to run to.
comparisons

Once outside the city and the system they've been forced to live in there are so many revelations which turn the world Evie and Raffy think they live in on its head. I loved seeing how their world view changed more and more the longer they spent outside.

I can already see that some people are going to slate this book and compare it to matched after they've read the first few pages. All I can say to that is the world built up is different and done so much better. There are so many ideas set up which are going to awesome once they are developed.

I can't wait for the next book.
READ IT FOR THE BRITISH BOOKS CHALLENGE 2012