Review: The prince who walked with Lions by Elizabeth Laird

March 25, 2012
The Prince who walked with Lions by Elizabeth Laird
Published by Macmillan 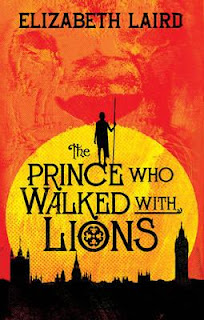 A sweeping epic about a prince torn from his mountain home. Based on a true story.

The British Army is circling the stronghold of the King of Abyssinia. Under orders from Queen Victoria, its mission is to rescue the British Envoy, held prisoner.

Watching with terror and awe is the king's young son, Alamayu. He knows that his father is as brave as a lion, but how on earth can he and his warriors stand against the well-equipped foreigners? As battle rages, everything that Alamayu fears comes to pass. The fighting is cruel and efficient. By the time it is over, Alamayu is left without parents, throne or friends.

In a misguided attempt to care for him, the British take Alamayu to England. There he is befriended by the queen herself and enrolled in Rugby College to become a 'proper' English gentleman. What the English see as an honour is, to this lonely Ethiopian prince, a horror.

This is Alamayu's story, seen through his eyes: the battle, the journey to England and the trauma of an English public school as he comes to terms with the hand that fate has dealt him and tries to build a new life.


***
The Prince who walked with lions was an interesting read.

I like Elizabeth Laird's style of historical fiction in that is always based on a huge amount of research of the events that book is about. The facts behind the story are solid and therefore the book is informative without being dull as the story-telling is spot on.

I really enjoyed this book - it mixes between present tense diary format with flashback scenes following the Abyssinian prince and looking back over his life. I found getting inside his head really interesting and learning about the history of a country I knew very little about really engaging.

An interesting and informative read.
READ IT FOR THE BRITISH BOOKS CHALLENGE