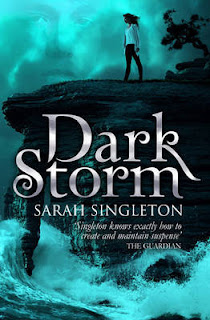 Ellie is staying with her maternal grandparents for the summer, while her recently bereaved dad takes off on holiday with his new girlfriend. Upset by his apparent callousness, missing her mother, and jealous for her dad's attention, she begins to spiral into depression. Her grandparents suggest she joins a local theatre group, to meet people her own age and get away from the dark thoughts that threaten to engulf her. But then she gets roped into a seance at the theatre, and is the only one who actually sees a real ghost. Now a spirit is contacting her from beyond the grave - and as the dead boy's story unfolds, Ellie finds herself falling in love with him. But if she solves his mystery and helps release his soul, will he be lost to her forever?


Dark storm is a beautifully written ghost story set in an atmospheric setting with interesting characters and an engaging storyline.

I have come to expect beautifully written prose from Srarh Singleton. She is one of those authors that I really think it a bit under-rated because no one seems to have heard of her but her writing is very good.

Ellie feels abandoned. her mother died not all that long ago and she is stuck staying with her grandparents while her father is off in America with his new girlfriend. In order to not have to spend the entire summer alone Ellie decides to join a local theatre group. This decision is one that changes her summer and helps to make her start to feel better. There she meets other teens and starts to finally get over losing her mother by making new friends and moving on.

The second thing that change her life for that summer is a chance find of an old model theatre in a  bookshop. She is fascinated by both it and the boy who made it. While in the process of making the theatre up something stirs the ghost of the boy who made it awake and from then on out Ellie helps him by researching more into who he was and finding out why he has unfinished business and in the process starts to fall in love with him

I loved the friendship Ellie had with Daisy, a local girl she meets at the drama club. I loved that they bounced off one another well and were quite expecting of each other despite that fact that Daisy is clearly in love with the Alex, the boy (and not ghost) who is falling in love with Ellie.

Coming from a small seaside town myself I really thought Sarah captured the feeling of living in one, the idea that, apart from the summer when the place is crowded with holiday makers, there's not that much to do and the frustrations of teens living there and the ways in which they find their own entertainment.

I won't tell you too much about the storyline except to say I thought it was really interesting and quite unique which is something I enjoyed because all too often of late I just feel like I'm reading the same book over and over again. A atmospheric and engaging read.
READ IT FOR THE BRITISH BOOKS CHALLENGE