March 18, 2012
I mentioned I had never read any Judy Blume and one of the lovely ladies in publicity at Macmillan immediately sent me these two books ... 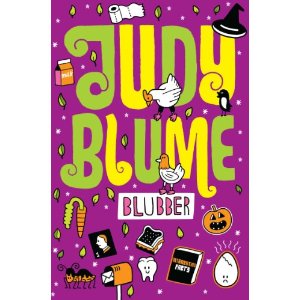 I'm almost ashamed to say before this book I hadn't ever read a Judy Blume despite hearing nothing but good things about her stuff. I really enjoyed it and am sad that I didn't discover her books when I was a teenager.

Blubber was a short yet poignant little book about bullying. I found it quite moving at points to see how the children were effected by the way in which others treated them because of something they had no control over. Equally it was very telling to see how the lead bully led her pack by keeping others afraid and on her side. It also gave real insight into how keeping silent about it really didn't help anyone at all and I think would show youngsters the importance of speaking out about problems if and when they arise. It also showed how easy it is for someone to become a bully without even realising it and how actually they don't always see that what they are doing is necessarily wrong at first which for me made me really think about the way in which I help to teach the children I teach about the nature of bullying.

I found Deenie to be a bit of a heart breaking story.

Deenie is a normal young girl. She goes about her life in the way youngsters do. She has a pushy mother who wants her to be a model but other than that she goes to school and spend time with her friends and carries on like a normal almost teenager.

It isn't until she finds out that she has scoliosis that things start to change when she finds out that she will have to wear a back brace for four years. Her mother is devastated and she finds it awkward and clumsy ripped her new clothes which she had to buy especially as her old ones don't fit with the brace. The story really is about her coming to terms with what she's dealing with.

The first was about educating children about being different. Dennie in this book is very judgemental about others around her who aren't quite normal including an old lady with a hump back and a girl in her class with a skin complaint and she doesn't start to change her mind until her own situation changes to make her less than normal. I thought her reaction was actually really typical of the naivety of youngsters and highlighted the need for people to teach children to be kinder and more tolerant of other people and their differences.

I also think this book had a lot of say about pushy mothers. The driving force in this book in Deenie's mother who is intent that Deenie will be a model when she is older regardless of whether Deenie wants to or not. The way in which she reacted to Deenie's condition was appalling to be perfectly honest and actually made Deenie feel a lot worse than she needed to.

All in all a quick little read with nice messages to tell. I enjoyed it.

Mel said…
I remember reading all the Judy Blume book when I was growing up and loving them. Blubber was a favourite of mine. I'm glad you liked them!
18 March 2012 at 07:47

Raimy from Readaraptor Hatchling said…
I enjoyed Blubbed but I love the sound of Deenie even more! I think I might have to get hold of that!!
18 March 2012 at 22:02

Anna Scott said…
Deenie was was of my favourites when I was younger - I distinctly remember how horrific the mother was, but at the same time the relationship was very convincing. I would highly recommend Tiger Eyes, if you want to read more Judy!
19 March 2012 at 12:32