Review: The repossession by Sam Hawksmoor

March 21, 2012
Review: The Repossession by Sam Hawksmoor
Published by Hodder 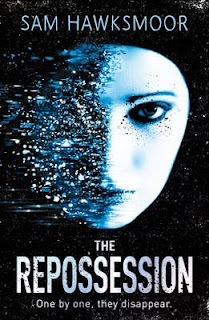 34 kids missing. Vanished without a trace.

Believing she is possessed, Genie Magee's mother has imprisoned her all summer encouraged by the sinister Reverend Schneider. Beautiful Rian, love of her life, sets her free, and their escape washes them up at Marshall's remote farmhouse downriver. But why are there newspaper clippings of the missing kids pinned to Marshall's bathroom wall? And should they believe his stories about the experiments at the Fortress, an underground research station nearby?

Genie meets Denis. Missing two years now, but hasn't grown an inch. Rian is haunted by Renée, who insists she's not actually dead. Soon they discover the terrible truth about Reverend Schneider and worse, Genie is next ... and Rian can't do a thing to prevent it.

The Repossession is just the beginning

I really enjoyed The Repossession. It was an interesting read with unique ideas and characters you can instantly warm to.

The story looks at the idea of the 100s of kids that go missing every year and poses an idea about where they maybe going in one particular area in America. The idea is actually quite chilling when you think about it as the kids involved just disappear without anyone ever finding out where they might have gone.

The main story revolves around Genie and Rian who are fast becoming my favourite YA couple. Up until Rian rescued her Genie was told by her mother and the local crazy-ass priest that she was possessed by the devil and that she was evil because she has a gift. As a consequence was locked into her room. Rian lives with his disabled mother and her boyfriend who he doesn't like. One day Rian decides to save Genie and the pair run away. Due to the fact that so many other kids have gone missing of late their disappearance isn't considered all that unusual.

I loved the relationship between Rian and Genie. It was both very innocent but all really sincere. Rian felt very much like his job in life was to look after Genie and keep her safe. I liked seeing how they interacted and looked after each other. Whilst on their escape they stumble across an old farm and spend the night in the barn. In the morning they are discovered by the farmer who offers them a place to stay and plays almost a fatherly role in their lives, offering them a home in return for companionship and help around the farm.

As the story develops it becomes much more. You start to get under the skin of why Genie's mother thought she was possessed when you start to see her gift coming out and being used more and more. You also start to find out more about why the teenagers locally have gone missing and where it is they may have gone. The ideas behind it are really interesting, bordering on a little bit sci-fi which I wasn't expecting, and really kept me engaging throughout.

I am certainly looking forward to book two now!

Anonymous said…
I'm reading this at at the moment, and it's good to hear someone else's views on it!!! Completely different from what I would usually pick up, but I'm enjoying it so far! Great review!
21 March 2012 at 00:37

Jesse Owen (Reading to Life) said…
I've seen this one around a lot lately - it sounds different from my usual reads but I think it might be worth picking up :)
21 March 2012 at 08:28