Review: Department 19 The Rising by Will Hill

March 29, 2012
The Rising (Department 19) by Will Hill
Published by Harper Collins 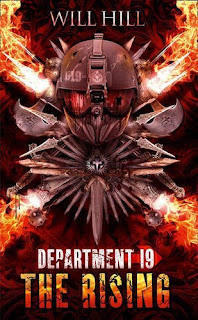 The pulse-pounding sequel to DEPARTMENT 19. Blockbusting sequel to DEPARTMENT 19, the biggest boy teen launch of 2011 – with over 25,000 copies sold in hardback and a devoted legion of Facebook fans.Amazing author Will Hill will be out on the road again in April to promote THE RISING, as well as maintaining a constant presence on Twitter.DEPARTMENT 6 IS THE ARMY.DEPARTMENT 13 IS MI5.DEPARTMENT 19 IS ALL THAT STANDS BETWEEN YOU AND THE END OF THE WORLD.After the terrifying attack on Lindisfarne at the end of the first book, Jamie, Larissa and Kate are recovering at Department 19 headquarters, waiting for news of Dracula’s stolen ashes.They won’t be waiting for long.Vampire forces are gathering. Old enemies are getting too close. And Dracula… is rising.

As you might well know if you follow my reviews one of the books that most took me by surprise last year was Will Hill's Department 19. Even my wimpy girl self loved it and want to get my very own T-Bone and go out vampire hunting with Jamie (PS Mr Hill making me love teenage boys is bad enough but then teasing me about their future fate on twitter is just mean!)

Department 19 is a secret government organisation which is responsible for hunting down all the vampires and making sure the rest of the population can sleep sound and safe in their beds every night without the knowledge such a thing actually exists. The people who work for them are hardcore fight machines trained and equipped using only the best, cutting edge and sometimes groundbreaking technology.

I thing I love most about this series is Jamie. At 17 he is one of the newest Operators in Department 19 following the footsteps of his father and grandfather. Last year he took down one of the oldest and most powerful vampire in the world earning himself a stellar reputation for the outset (not that always makes him all that popular). What I love about him is that underneath all that hard man image, and at times arrogance, he is still just a teenage boy who wants hang out with his friends, have a girlfriend and at times he just needs his mum. The boy is also a heart breaker in training which is where I fall down somewhat. This is really evident in the way his relationships develop both with Larissa and with his friend Kate through the book and how he manages to simultaneously upset both of them mainly through being a naive boy.

The story starts off in the same breakneck pace I've come to expect after reading Book 1 and didn't really let up all  the way through. This book is a monster at 700 pages long but I found myself zipping through it quickly and never having a moment to get bored with all the action that was going on around the main characters. There were several sections where I didn't quite believe that I had read (just you wait until you get to page 504 and have to peel your jaw up from off the floor).  The actions scenes had me torn between needing to know what happened next, not wanting to look at it (yes I know it is a book and I am being silly) as some scenes were all a bit too gory and in stunned disbelief about what had just gone down.

Going back to talking about cute teenage boys (and I will stop in a minute) the addition of Matt to the story, who you might remember from book 1, was most welcome. He is almost the complete opposite of Jamie being super clever rather than super tough but that doesn't mean he isn't brave. I can't wait to see how his character develops in future books.

There is also a brilliant side plot with a character from the first book. I won't let you too much about it as it is rather spoilery but I loved it especially the "JJaaaiiimmmmmeeeeeeeeeeeee" line which made me both want to sob with relief and whoop with joy.

The final major showdown of the book really doesn't hold anything back. The violence in it is brutal with several bits which were just a bit too horrible to comprehend. Had the book been a movie I would have been hiding behind my cushion at that point. Several bits again left me completely stunned and needing a minute to take it all in.

The ending of the book was awesome with so many things set up for the final book in the series and a final showdown with those evil vampires.

Not a book for the faint hearted. A thrilling and fast paced ride which keeps you on the edge of your seat. Perfect for boys and girls sick of the cliched paranormal romance. I know a 12 year old boy who is going to be extremely jealous when I tell him what I read over my Christmas Holidays!

Jesse Owen (Reading to Life) said…
I bought The Rising yesterday - I'm hoping my shelf can take the weight!