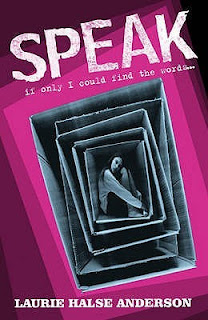 From her first moment at Merryweather High, Melinda Sordino knows she's an outcast. She busted an end-of-summer party by calling the cops - a major infraction in high-school society - so her old friends won't talk to her, and people she doesn't know glare at her. No one knows why she called the police, and she can't get out the words to explain. So she retreats into her head, where the lies and hypocrisies of high school stand in stark relief to her own silence. But it's not so comfortable in her head, either - there's something banging around in there that she doesn't want to think about. But, try as she might, it just won't go away...

Speak is one of those read I've heard about time and time again since I've started blogging as one that I need to read. I am pleased to say it packs the emotional punch I was promised.

This book really hits home when you see the way in which Melinda is treated for something that really wasn't her fault. She is ignored by her peers in a cruel way (even if they don't realise it) and her attempts to make friends with other just don't work as she finds herself dropped as soon as a better subsitute is found. Even her teachers and parents treat her differently and keep her at a distance.

It takes a while for the reader to get to the bottom of why Melinda is the way she is and to find out what actually happened to her. If I had any complaint about this book it is that you spend a long time hearing about the day to day aspect of her life and how awful it is. That isn't to say that her sorry isn't poignant seeing the way in which she is treated but I would have liked to see the story start a little later and then gone on after and see how Melinda started to build her life up again afterwards.

For me the morale of this story is that it is always always right to speak up. The realisation that Melinda has when she gets feedback from a note she scrawled on the door in the toilets which makes her realise she isn't alone showed this brilliantly.

A heart-felt book which has brilliant morales and is well worth a read.

Raimy from Readaraptor Hatchling said…
Ive not got round to reading this one but after reading Wintergirls I really want too
21 March 2012 at 08:49

The Insouciant Sophisticate said…
Wow-I've never seen this cover. It makes me feel a little claustrophobic with all the boxes piled on top of each other. I remember reading this book about eight years ago in one day, unable to put it down due to the emotional power in the story.
23 March 2012 at 03:41