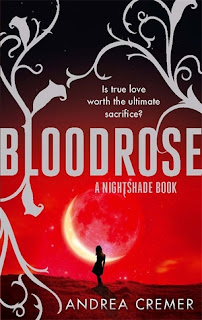 But now that the final battle is upon her, there's more at stake than fighting. There's saving Ren, even if it incurs Shay's wrath. There's keeping Ansel safe, even if he's been branded a traitor. There's proving herself as the pack's alpha, facing unnamable horrors, and ridding the world of the Keepers' magic once and for all. And then there's deciding what to do when the war ends. If Calla makes it out alive, that is.

What can I say about this book??

I love Nightshade. I loved it so much I bough the US hardback edition. I wasn't all that impressed with wolfsbane but decided to stick with the series based on how much I loved the first book and put it down to being "a middle book in the series" book. I was therefore still looking forward to bloodrose and eagerly picked it up as soon as it arrived.

I've got to say I really really wasn't impressed with the final book. The story was fast paced sure but it seemed really forced. It got to the point where I wasn't really sure about what was going on - it just seemed too much at once. Couldn't we have some of that action in book two?

I hated the way things turned out with the love triangle. I won't say too much but actually that way it turned out killed me a little bit inside.

There was a lot looking at the history and background to the pack in the last two books. I actually found this really dull and actually got to the point where I didn't care (and this is me talking as a History Graduate). I just felt like the author was trying to be too clever - I can see why she would have had those ideas in her head whilst writing but I felt including all the details just slowed the story and made it dull.

The ending really annoyed me and I felt made the entire trilogy pointless... All in all I really wasn't a fan which is a shame because I loved the first book.

The Insouciant Sophisticate said…
I really loved all of the history stuff and was very shocked by the ending of the triangle-was not expecting that. I also didn't really like the ending; I kind of read it ahead of time and was so confused but the middle pages didn't make it any better.
20 March 2012 at 02:03