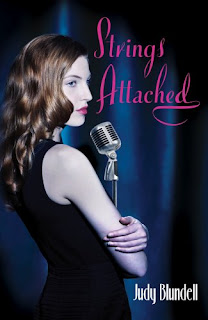 Kit Corrigan has always dreamed of being a star. But in order to get there, she needs to break up with Billy, who's going to Korea, and leave her family in Providence, Rhode Island, to move to New York City. There, she finds small roles and a city that's tough to live in.After she meets with Billy's father, Nate, things get a little easier. But Nate is a lawyer who defends mobsters, and soon Kit realizes that she has to do what he asks of her. Kit's life starts to feel beyond her control, especially once she uncovers a mystery that she needs to solve in order to protect the people she loves.


***
Strings attached was one of those books which I came away from reading with no real idea about whether I actually liked it or not as a whole.

There were several things I liked about the book. I enjoyed how the book gave you a real sense of period and a feel for the time it was set without overloading you with historical fact after fact. The author was clever in how they did this and it really helped me to get into the story and the mindset of the characters. I liked the main character Kit and how the story followed her as she left home on her own and attempted to make it big in New York. She is one of those characters that you really want to champion as she really goes through it in order to try and follow her dreams. I also liked the gangster storyline which runs behind the scenes slowly twisting and turning and ultimately affecting the main story in a massive way.

However the thing that really spoiled the book for me was the way it was narrated. The book flitted backwards and forwards in the timeline so I regularly found myself confused to what was happening and what the characters knew at any given point in time (especially as some were only months apart). In fact it confused me so much there were several times when I almost put the book down and gave up with it.

All in all a good story and likable characters just hard and confusing to follow at times. Definitely one you need to be switched on to read

Annette Mills said…
I plan to read this in the next week. I'll have to see what I think about the change in narration. I really loved her other book.
2 August 2011 at 00:04

Ynysawdre Elderly Residents Association said…
Interesting I might put it on the library wish-list
4 August 2011 at 18:54

Michelle Fluttering Butterflies said…
I tried another book by the same author and I just couldn't get into it :( So hearing what you said about the narration, I don't think this book will be one for me.
8 August 2011 at 08:52