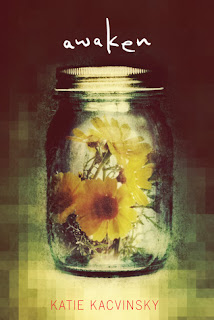 Maddie lives in a world where everything is done on the computer. Whether it’s to go to school or on a date, people don’t venture out of their home. There’s really no need. For the most part, Maddie’s okay with the solitary, digital life—until she meets Justin. Justin likes being with people. He enjoys the physical closeness of face-to-face interactions. People aren’t meant to be alone, he tells her.

Suddenly, Maddie feels something awakening inside her—a feeling that maybe there is a different, better way to live. But with society and her parents telling her otherwise, Maddie is going to have to learn to stand up for herself if she wants to change the path her life is taking.

In this not-so-brave new world, two young people struggle to carve out their own space.


***
I think the most frightening thing about this book is that the events in it could actually happen. At the start of the book you are propelled into a world where the majority of people do not leave their homes and interact with other people via computers through various social networking sites. I think the initial message of this books about the problems of new technology inhibiting social interaction is actually quite a poignant in today's day and age.

At the start of the book you met Maddie as she makes a rare venture out of house into the big wide world to attend a study group. Her parents, well her father in particular come across as very controlling not wanting her to attend what we today would see as an ordinary and everyday thing. It is there she meets Justin which is where the story really starts from. Justin doesn't like all the technology invading his day to day life and opens Maddie's eyes to the world without technology.

I will not go into detail about the plot of the story in too much detail but I did love several things about it. I loved the relationship that was built up between Justin and Maddie as the story went on. I love Maddie as a character and enjoyed seeing how she developed as the story went on. The whole anti-digital school movement was well done and was actually quite insightful in how the book portrayed the use of government sponsored propaganda in influencing the masses.

All in all an excellent debut with insightful ideas, awesome characters and a pacey plot which I thoroughly enjoyed and would recommend to others.

Annette Mills said…
I really plan to read this book, but I'm not at all drawn to the cover. I've heard many say it's beautiful, and also that is has something to do with the book, but you wouldn't think so..... I just don't like it. But I've read so many good things about this one, that I'm going to need to find it.
9 August 2011 at 00:56

Michelle Fluttering Butterflies said…
This one sounds really interesting and I'm looking forward to reading it!
9 August 2011 at 08:51

Selina said…
LOVED this book! The dystopian setting was not farfetched. Justin and Maddie are great together. I was a bit disappointed by the ending though. It was a bit too... happy? Great review!
9 August 2011 at 10:49

Karen C said…
I reviewed this one a while back and had very similar thoughts to you. How scary that this could actually happen! It was a great read, I agree!
9 August 2011 at 14:44

Ria said…
I really enjoyed reading this one. I thought the world-building was creative, and even if the romance annoyed me a little sometimes, the characters were at least developed enough so that that they themselves weren't the ones being annoying. More people could do well to read this book, I think.
9 August 2011 at 14:57