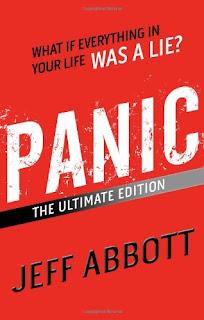 Evan has a perfect life-until his mother is murdered. Suddenly, he himself is pursued by a circle of killers, only to discover that his entire past has been a lie. With only one chance at survival, and with no one he can trust, he must discover the truth about his family-and who he really is.


***
Panic is a book I would recommend for those who enjoy books like The Da Vinci Code or those written by Harlan Coben. It is fast paced, engaging crime thriller which kept me happily entertained for a few hours.

Evan gets a panicked phone call in the middle of the day from his mother demanding that he comes home instantly. It's totally out of character and strange but he does it anyway. Upon arriving home he gets the feeling something isn't quite right and soon discovers his mother's body laid out on the floor dead and is jumped on by someone and hung up to die.

Panic is one of those books which is full of twists and turns as the main character is being chased. Characters double cross each other and stab each other in the back and there are plenty of near misses where the main character seems to be in an impossible situation with no way out but then at the last minute as luck would have it something pop up to save the day (well the hour). It is engaging and fun reading but I would also argue it's not something that hasn't been done before (albeit maybe not with main character so young)

The book finishes with an opening ending which would lead quite nicely into a future books and certainly one I may pursue if the opportunity to do so arises.