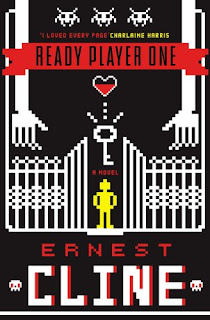 Like most of humanity, Wade Watts escapes his grim surroundings by spending his waking hours jacked into the OASIS, a sprawling virtual utopia that lets you be anything you want to be, a place where you can live and play and fall in love on any of ten thousand planets.

And like most of humanity, Wade dreams of being the one to discover the ultimate lottery ticket that lies concealed within this virtual world. For somewhere inside this giant networked playground, OASIS creator James Halliday has hidden a series of fiendish puzzles that will yield massive fortune—and remarkable power—to whoever can unlock them.

For years, millions have struggled fruitlessly to attain this prize, knowing only that Halliday’s riddles are based in the pop culture he loved—that of the late twentieth century. And for years, millions have found in this quest another means of escape, retreating into happy, obsessive study of Halliday’s icons. Like many of his contemporaries, Wade is as comfortable debating the finer points of John Hughes’s oeuvre, playing Pac-Man, or reciting Devo lyrics as he is scrounging power to run his OASIS rig.

And then Wade stumbles upon the first puzzle.

Suddenly the whole world is watching, and thousands of competitors join the hunt—among them certain powerful players who are willing to commit very real murder to beat Wade to this prize. Now the only way for Wade to survive and preserve everything he knows is to win. But to do so, he may have to leave behind his oh-so-perfect virtual existence and face up to life—and love—in the real world he’s always been so desperate to escape.

A world at stake.
A quest for the ultimate prize.
Are you ready?


***
Ready Player One is one of the most innovative stories I've read in quite some time. The story after establishing itself is relentlessly paced, immersing the reader into an elaborate virtual reality environment that draws upon a rich mixture of 80s cult television, music, golden-age computer gaming and role-playing. As someone who grew up at this time and probably spent more than my fair share of time engaged in the above pursuits I could identify with so many of the references. Reading Ready Player One really was a nostalgic trip into my childhood; I found myself laughing aloud as I reminisced on things I haven't thought of in years.

The story focuses on an online competition in a vast virtual reality setting filled with millions of players, a prize beyond imagining awaits the first player to solve the challenge. When the protagonist stumbles upon the answer to the first stage of the puzzle he finds himself pitted against a ruthless corporation in his quest for the reward.
The story, while being a trip into yesterday, however also addresses some very current issues dealing with individuals who are totally immersed in their online personas and actually have no life in the real world - they are legends online but actually sad socially-inept individuals in reality. Another theme is one of individual self-expression combating corporate oppression.

I would highly recommend this book. Would make a great gift to anyone who grew up in the 80s.

Ria said…
I adored this book. It was a wonderfully geeky nostalgia ride for anyone whose childhood took place during the 80s and 90s!
26 August 2011 at 02:20

Jesse Owen (Reading to Life) said…
I completely agree with this review, I finished this the other day and it really is a ride in geeky nostalgia.
28 August 2011 at 12:02