Bookcase Showcase: Catherine Bruton author of We can be Heroes

August 06, 2011
My bookshelves provide a perfect metaphor for my life and my writing. They started out  all organised, full of great intentions  of categorisation by genre and chronology -  and there is still the semblance of some order in there  if you look closely.  But then it all goes haywire. Too many books, too little time  - the craziness takes over. My writing is just like that:  no matter how carefully I plan my novels and try to stick to my detailed synopsis, they just spiral wildly out of control, sprouting sub-plots and subtext and bits that don’t fit in neatly, just like the miscellaneous muddles on  my bookcases.  Underneath  it all, the structure is still there and I can usually find a book if I need it but I’d challenge anyone else to see the system beneath the chaos!
Oh, and  now I come to think of it, my shelves also probably show a lot about what influences my writing too.  My new novel ‘We Can be Heroes’ was inspired by ‘To Kill a Mockingbird’ but also by ‘Millions’ and ‘The Curious Incident’ and ‘How I live Now’ and the Alex Rider books and my son’s manga collection!   And I think my bookshelves probably show that I’m a girl who  loves Virgina Woolf AND Jacqueline Wilson; John Keats and J K Rowling; Jane Austen and Joanna Nadin. Anyway, enough rambling, here goes. . . 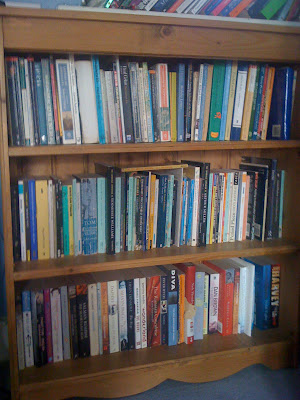 So, let’s start with the good intentions. As well as writing novels and newspaper articles I also teach English so I attempted to arrange my books by genre  - drama, poetry, prose, non-fiction, biography etc. Then within each genre there is  a vague chronology - and I do mean vague (i.e. by century – roughly – and sometimes not even that!) So it's no good telling me that Dickens was writing after the Brontes or ‘1984’ was published after 'Animal Farm'  (was it?) because  the system is nowhere near that precise!
I try to put any books of criticism  or essays about an author next to their works. So when a friend asked for a copy of a ‘Streetcar named Desire’ the other day  I was able to lay my hands on it straight away, along with an autobiography of Tennessee Williams and a books of essays on his plays -  and I felt ridiculously  proud of myself!
So, the top shelf here is poetry  (favourites are Keats, Plath, Wordsworth and Heaney), then drama (lots of Tennessee Williams and plays by Shared Experience), then modern novels – a bit of a random assortment, lots of YA stuff and  things I’ve read for my book group.  I can see Joanna Nadin’s ‘Spies, Dad,  Big Lauren and Me’ in there which I love, and  Niccolo Ammaniti’s ‘I’m not scared’  which is one of my favourite novels and also ‘The Finest Type of English Womanhood’ by Rachel Heath, which blew me away recently. 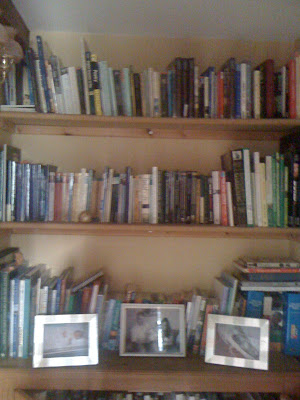 Still trying to go on genre here but things are already going a bit bonkers. There’s a Shakespeare shelf  (second one down) and a drama shelf  and then a section that’s supposed to be books about places we’ve visited and  bit for gardening books. Then there are all the books that don’t fit into categories.  I spy a section there on books I’ve used for researching novels, and then there are the innumerable books I’ve bought to read for book group and  or books I’ve been given as gifts.
They are the ones that clutter the  shelves and which I suppose I should  either cull or devise some sort of system for but I find it really hard to throw out books. My father was an academic and very frugal in many ways but he always let us buy any books we wanted.  I remember him saying, ‘Any book – even a bad book – is a book and therefore sacred’. I suspect this explains my inability to take books to jumble sales! 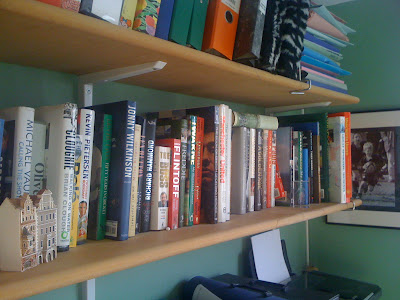 This is my husband’s dedicated sports writing shelf and if you look carefully you can just spy a picture of my son the sporting hero on the rugby pitch in the background. I’m ashamed to admit I don’t think I’ve read a single thing from this shelf! 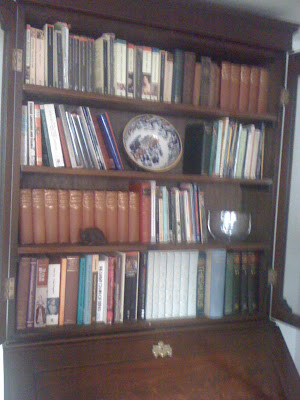 Now, this is the big old bookcase  in our sitting room. It used to belong to Granny Bruton, a formidable and incredible woman, and  it has been arranged, I’m ashamed to say, purely  for aesthetics because it’s the shelf visitors are most likely to see! So it has all my nice old volumes of the classics (my dad gave me the Folio editions of Jane Austen and Chaucer, I think for my eighteenth birthday, and I bought the Dickens set from a second hand bookshop just before I went up to Oxford). There are also a few titles in there to remind me I was quite clever once and knew about stuff like deconstruction and Aristotelian definitions of tragedy  all knowledge  of which has  since been washed away by the ravages of motherhood to be replaced by encyclopaedic knowledge of the lyrics to ‘High School Musical’ songs and  ‘The Gruffalo’ books.  From Derrida to The Hungry Caterpillar – that’s me!
Oh, and  there are a couple of books in there which  have lived in Granny Bruton’s bookshelf    since  my father in law was a boy – an old Enid Blyton ‘The Circus of Adventure’ and a Willard Price, I think.  They smell slightly salty because Granny B lived in Cornwall by the sea, and I like to think they retain a bit of her indomitable spirit too. 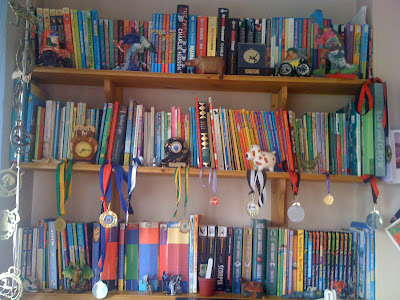 Then there are the kids’ bookshelves, also full to overflowing.  My eight year old son gets through books like  they’re going out of fashion  and is a real collector. Before I was allowed to take this picture he had to make sure that all his Charlie Higson books were together, all the Harry Potters were side by side, all the Mr Gums, Michael Morpurgos, Percy Jacksons all lined up with their fellows. His book shelf is also where he hangs all his sports medals and his collections of fossils and crystal dragons and goodness only knows what else!
Although he reads independently (‘Grubtown tales’, the ‘How to Train your Dragon’ series  and ‘The Bare Bum Gang’ are all faves), I still read to him every night and we have loved working our way through Rick Riordan, Michael Morpurgo, J K Rowling,  Anthony Horowitz, Andy Stanton  and many others. I have become a great fan of the boys’ action thriller genre and  have been known to sneak off to finish one of his books after I’ve called lights out.
Reading with my children really inspires my own writing  because there is some amazing children’s fiction out there. I don’t think I’ve ever laughed so much in my life as I did when we were reading ‘Mr Gum and the Goblins’ and I cried buckets at the end of ‘Adolphus Tips’. Next up for me and Joe is Frank Cottrell Boyce whom I love and so I hope Joe will too. 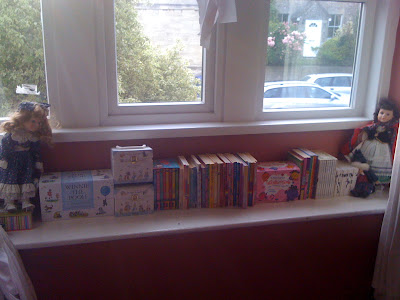 My  six year old daughter has recently graduated onto chapter books  too and  is already accumulating  a luridly pink selection on her windowsill so we need to get her a proper bookshelf soon.  She is a huge fan of the ‘Malory Towers’ books and she and I have worked through not only Blyton’s original six, but also Pamela Cox’s very authentically Blyton-esque no’s 7 – 12. She is now like a mastermind when it comes to Malory Towers and prides herself on spotting continuity errors!
She also loves ‘Winnie the Pooh’, ‘Penny Dreadful’ (written by a very good friend of mine and inspired by  her daughter who is Elsie’s pal – in fact Elsie Maud will herself be making an appearance in PD – NO. 3 as Penny’s nemesis so we can’t wait till that comes out next year!) I can’t wait to share some of my childhood faves with her like ‘Anne of Green Gables’, ‘The Cricket in Times Square’, ‘The Silver Sword’, ‘Veronica at the Wells’ and ‘The Family from One End Street’.
So, that’s it. That’s me – the girl who loves classics, knows her Shakespeare and has been known to sit down with an anthology of poetry, but who also loves children’s books  and YA fiction and stayed up till three in the morning  recently to finish ‘Percy Jackson and the Lightening Sword’ and blubbed uncontrollably at her son’s cricket practice because she was reading ‘My Sister Lives on the Mantlepiece’.
Actually, I know what sums me  as a reader -  and as a writer! When I was in labour with each of my children, I read   to help me relax  - and because neither of them was in a great hurry to emerge! With my daughter I read ‘Wives and Daughters’ by Elizabeth Gaskell  (which seemed appropriate  because I knew she was  a girl and I am a sucker for a love story with a happy ending). With my son I read ‘Harry Potter and The Order of the Phoenix’ (which I read cover to cover before  he made an appearance – think about how long that makes my labour and weep!)  So I reckon that just about sums me up – and it sums ‘We Can be Heroes’ too  because it was inspired by writers as diverse as Anthony Horowitz and Harper Lee, and  I really, really hope it will appeal to the kids I teach but also to the members of my lovely book group.
Right, that’s me. Now I’m off to do some book tidying!

Michelle Fluttering Butterflies said…
Aww, what lovely shelves! I think your son's shelves are my favourite. I love the chaos with all the medals and other things, but also the colour! I really love that he's SUCH a reader.
8 August 2011 at 08:58

Karen C said…
Great bookcases. I love that your 8 year old son and 6 year old daughter are very into reading. It give me hope for my 5 year old who will do anything to avoid his reading homework and is still at the 'sounding out' every word stage.

BookGeek said…
Your whole family reads? I'm the loner in the pack. I write the same way as you. All good intentions and then I get distracted, I go off on a tangent, blah blah blah...but I DO eventually come back form those crazy adventures and make it to the end.
8 August 2011 at 22:02