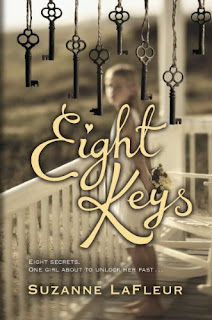 Elise and Franklin have always been best friends. Elise has always lived in the big house with her loving Uncle and Aunt, because Elise's parents died when she was too young to remember them. There's always been a barn behind the house with eight locked doors on the second floor.

When Elise and Franklin start middle school, things feel all wrong. Bullying. Not fitting in. Franklin suddenly seems babyish. Then, soon after her 12th birthday, Elise receives a mysterious key left for her by her father. A key that unlocks one of the eight doors upstairs in the barn...


***
Eight keys is a beautifully written story about friendship, family and belonging. I enjoyed reading it and will certainly be looking to read more of the author's work very soon.

The first was about family and belonging. Elise lives with Aunt and Uncle after having lost both her parents at a young age. She gets on well with them but often has questions about her real parents floating around her head. As the book progresses Elise receives eight keys each one unlocking a different room prepared by her father before he died to teach Elise something or tell her more about her family. I loved how this was done and thought it was a really nice touch.

The second message I though the book has was one about friendship and fitting in. Elise starts Middle School and has a terrible time due to the stereotypical "popular" girl in her class who goes out of her way to make Elise's life miserable. In a bid to deal the problem Elise alienates her best friend without realising she is doing it. Again I thought it was a really nice message and actually a bit of a thinker in itself as it something that I think many of us have done (even unwittingly) at some point in our lives as an attempt to fit in.

All in all a wonderful book which I enjoyed and would recommend to others.

Cait said…
This sounds like such a cute book! seen many excellent reviews of it the past few days

Michelle Fluttering Butterflies said…
I really loved this one! For me it was very emotional, I adore books that deal with family and belonging like this one did.
11 August 2011 at 12:14

Samantha (A Dream of Books) said…
I loved this book! I haven't read Suzanne LaFleur's debut but I want to after finishing this one. It made me cry!
11 August 2011 at 16:04