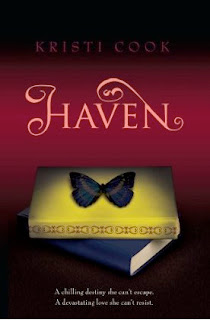 One month into her junior year, sixteen-year-old Violet McKenna transfers to the Winterhaven School in New York’s Hudson Valley, inexplicably drawn to the boarding school with high hopes. Leaving Atlanta behind, she’s looking forward to a fresh start--a new school, and new classmates who will not know her deepest, darkest secret, the one she’s tried to hide all her life: strange, foreboding visions of the future.

But Winterhaven has secrets of its own, secrets that run far deeper than Violet’s. Everyone there--every student, every teacher--has psychic abilities, 'gifts and talents,' they like to call them. Once the initial shock of discovery wears off, Violet realizes that the school is a safe haven for people like her. Soon, Violet has a new circle of friends, a new life, and maybe even a boyfriend--Aidan Gray, perhaps the smartest, hottest guy at Winterhaven.

Only there’s more to Aidan than meets the eye--much, much more. And once she learns the horrible truth, there’s no turning back from her destiny. Their destiny. Together, Violet and Aidan must face a common enemy--if only they can do so without destroying each other first.


***
I'm going to start this review by saying that in someways my review is a little unfair but I think in someways quite justified. I didn't actually finish the book. Those of you who follow my reviews know it is rare for me to review a book I didn't finish but I in this case I decided to put my thoughts into a review of sorts


To start in the book's defence I would argue that it is actually nicely written and the characters are engaging. What I did read I did quite enjoy to a certain extent in one of those guilty pleasure kind of ways

However there are a few resons why I stopped reading the book half way through (there are spoilers from here on out). Whilst I was reading this book I got this feeling that I had read this book before. That was because every single idea in this book was taken from somewhere else e.g:
Don't get me wrong I had read several books in the last year or so which take inspiration from such titles but the reason why I just gave up on this one is because none of it appeared to be original and just a mash up of ideas taken from other places.

KelliumSims said…
I hate anything that is just a mash-up of other people's work. Thanks for letting us know :)

I've only ever read one other review for this book and the blogger just gushed about it. Nice to have some differing opinions
19 August 2011 at 13:30