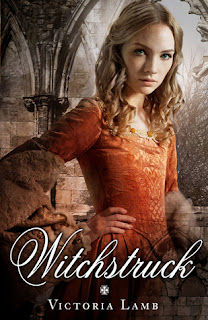 I must admit the historian in me cringed a little bit when I first heard about this book. Paranormal romance set in Tudor times? Quite honestly I wasn't sure when I agreed to read it. That feeling stuck with me when I started reading it and I actually disliked the fact that Meg, the main character, was interacting with the future Queen Elizabeth I. I could have got onboard with the story exactly as it was despite my reservations but I felt that element to the book was taking it a bit too far. I hope the finished copy has some kind of author's note / historical note which explains why the author choose to use the character of Elizabeth in this way more for my own curiosity if nothing else.

That said I did actually really enjoy this book especially when things kicked off and Elizabeth left the action. I found the storyline to be really engaging and I enjoyed the paranormal element of witchcraft especially considering the consequence for the main characters if and when she was caught and accused of being a witch in Tudor times. I loved the main character Meg as she is one of those heroines you can really get behind and root for. She is up against it all being both a girl and a witch in Tudor England. The other character that really stood out for me was Marcus Dent, witchfinder and prospective husband for young Meg. I hated the man! I hated seeing how he treated Meg like an object that could be bought and hated him even more for what he did to her once she'd spurned his affections. I think teenagers (and those like me with a brain of a teenager) will also lap up the blossoming love story that is started in this book between Meg and the Young Priest. It isn't fast paced as it is tied by the constraints of the time period in which its set but it is compulsive nonetheless

So all in all in the end this was a book I really enjoyed. Yes the historian was wary of certain parts of it but at the end of the day if books like this can drawn teenagers in and get them excited and engaged in history then it's no bad thing. I'll certainly be interested in seeing where the story goes next.