Review: The Seeing by Diana Hendry

July 11, 2012
The Seeing by Diana Hendry
Published by RHCB 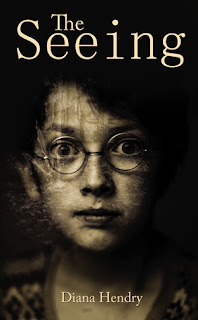 "What gave me a sudden shiver was the notion that there were two of me. The little sister me, who was good and mostly kind; the girl Alice and Dottie knew. And then there was this other me, the one lurking inside me, eager for danger and risk, for something that could be as wild as the sea in winter. For Natalie."

Nothing ever seems to happen in the quiet, respectable seaside town of Norton. The war is over, and everyone's thrilled to be living peacefully - everyone but thirteen-year-old Lizzie, who's so bored she feels like she could scream. Until wild, dangerous, break-all-the-rules Natalie arrives. Lizzie is drawn irresistibly to the exciting new girl from the wrong side of the tracks, and as the girls grow closer over the summer, Lizzie discovers a new side to the town - and to herself - that she had never imagined before.

Natalie and her young brother, Philip, let Lizzie in on a secret. Despite what everyone thinks, the danger of war is still hanging over them. Philip has a 'second sight', and all around him he sees evil: apparently innocent people, hiding in this quiet town until the time is right for revenge. Natalie and Philip call them 'Left-Over Nazis'. It's up to them to root these people out and force them out of Norton. Lizzie is swept up in what begins as an exciting game, but as the children begin to target their neighbours, the consequences of Philip's 'gift' spiral quickly out of control.


***
This was a short, chilling and atmospheric read which I enjoyed.

The thing I enjoyed most about this book was the historical backdrop it is set in. It's set in post war Britain which is a fascinating world to read about. The country is changing as people are demanding more after having to experience total war and the demands that experience put on the population whether they were part of the armed forces or not. For some living in this new world means finally having all those things they couldn't have before and saw the explosion of the cosumer market whilst others still lived in poverty. I liked seeing the contrast between the families of the two girls at either end of this scale and seeing how their world views differed because of this.

The book also builds up a sense of paranoia. You are never quite sure whether or not Philip's abilities are real or not and the way in which he and his sister hunt out old Nazis is creepy. It shows you how the actions of a few can make life very difficult for outsiders and also leaves you with a seed of doubt in your mind to whether these people are as innocent as they say they are or whether it is just post-war hysteria.

The ending of the book was the most unsettling for me. The story goes very dark and wasn't at all what I expected from the book which was quite nice in someways as I hadn't second guessed what might happen and was therefore surprised.

All in all a unique and interesting read.

Raimy from Readaraptor Hatchling said…
I love the sound and look of this one, I really hope its as creepy as I think it will be, will ave to grab a copy soon!
18 July 2012 at 21:32