Review: The Glimpse by Claire Merle

July 25, 2012
The Glimpse by Claire Merle
Published by Faber and Faber 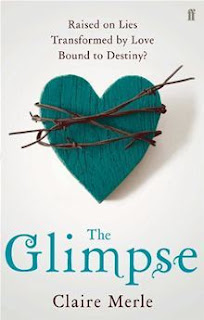 In a near future, society is segregated according to whether people are genetically disposed to mental illness. 17-year-old Ana has been living the privileged life of a Pure due to an error in her DNA test. When the authorities find out, she faces banishment from her safe Community, a fate only thwarted by the fact that she has already been promised to Pure-boy Jasper Taurell.

Jasper is from a rich and influential family and despite Ana’s condition, wants to be with her. The authorities grant Ana a tentative reprieve. If she is joined to Jasper before her 18th birthday, she may stay in the Community until her illness manifests. But if Jasper changes his mind, she will be cast out among the Crazies. As Ana’s joining ceremony and her birthday loom closer, she dares to hope she will be saved from the horror of the City and live a ‘normal’ life. But then Jasper disappears.

Led to believe Jasper has been taken by a strange sect the authorities will not intefere with, Ana sneaks out of her well-guarded Community to find him herself. Her search takes her through the underbelly of society, and as she delves deeper into the mystery of Jasper’s abduction she uncovers some devastating truths that destroy everything she has grown up to believe.

I really enjoyed The glimpse for several reasons.

First and foremost I loved that it was a UK based dystopian YA novel as there seems to be so much dystopian out there but not much of it being British. I therefore loved the feel of the book and its setting especially when I could picture the rough geography of the closed cities in my mind.

This book deals with an interesting idea in the way the society deals with separating people because of mental illness (or the potential to be carrying one). I found it fascinating as an insight especially consider the discrimination that fairly exists in our society today towards people with mental illnesses. I really liked how the author really got into the debate around what classed as being mentally ill and I think it actually will raise awareness of the discrimination people go through on a daily basis. It also raised a lot of questions about the morality of DNA testing which I found to be really thought-provoking and resonate in today's society.

I really enjoyed following the story of the main character and found her story really engaging from page one. Ana was everything I look for in a character, strong and feisty yet without being arrogant and with enough conviction to stand up for what she believes in. The storyline was pacey and engaging and, while left on a bit of a cliffhanger, didn't leave me with that unsatisfied feeling that nothing had been accomplished as a reader that some books seem to do.

all in all a fab read.