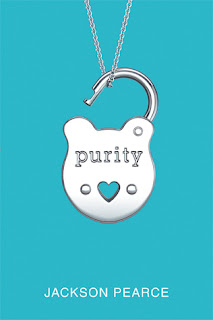 A novel about love, loss, and sex -- but not necessarily in that order.

Before her mother died, Shelby promised three things: to listen to her father, to love as much as possible, and to live without restraint. Those Promises become harder to keep when Shelby's father joins the planning committee for the Princess Ball, an annual dance that ends with a ceremonial vow to live pure lives -- in other words, no "bad behavior," no breaking the rules, and definitely no sex.

Torn between Promises One and Three, Shelby makes a decision -- to exploit a loophole and lose her virginity before taking the vow. But somewhere between failed hookup attempts and helping her dad plan the ball, Shelby starts to understand what her mother really meant, what her father really needs, and who really has the right to her purity.

I really enjoyed Purity and I thought it was a brilliantly different read from an author I thought I knew so well but I clearly didn't.

Purity is a brilliant contemp novel about Shelby a teenage girl living life according to three promises she made to her dying mother. Keeping those promises proves to be very difficult at times for Shelby as she's torn between the things she might want to do and the things she is told she ought to do. Everything comes to a head when Shelby's father starts to arrange a princess ball during which Shelby will have to promises her purity to her father. Due to her promise to her mother to do as her after says she finds herself in a situation of needing to do all the things she wants to do like have sex to find a loophole out of her promise.

I loved several things about this book. Firstly I loved Shelby and her teenage ways. I love her logic and her morals, the relationships she has with the people around her and the way she lives her life. I thought her quest to have sex before the princess ball was really poignant and funny and I loved seeing how her relationship with her father changed as the book went on.

A quick read at 218 but packed full of laughs and all the different feelings associated with being a teenager. Fab stuff which is highly recommended.

Michelle @ Book Briefs said…
I have seen a few reviews of this book and each one makes me want to read it even more. I have not read any of this authors books, and I have really been wanting to.