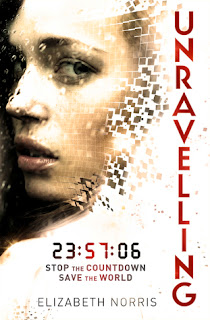 STOP THE COUNTDOWN. SAVE THE WORLD…

Leaving the beach, seventeen-year-old Janelle Tenner is hit head on by a pickup truck.

Then Ben Michaels, resident stoner, is leaning over her. And even though it isn't possible, she knows Ben somehow brought her back to life…

Meanwhile, Janelle's father, a special agent for the FBI, starts working on a case that seems strangely connected to Ben. Digging in his files, Janelle finds a mysterious device – one that seems to be counting down to something that will happen in 23 days and 10 hours time.

That something? It might just be the end of the world. And if Janelle wants to stop it, she's going to need to uncover Ben's secrets – and keep from falling in love with him in the process…

Unravelling is an awesome read. It twists and turns and keeps you on your toes from the very first page right through until the very last

This book was good in how it leads you down one route of thinking and then completely twists and changes your mind time and time again. The book I thought I was reading when I started wasn't the book I finished and I found that to be be really refreshing indeed. In that way I can see why the publishers have been making the comparisons to 24 as you really don't know what's lurking in the next chapter to throw you completely.

I loved the main character Janelle. She is one of those girls you can really get behind. She's spend most of her teenage years looking after her family whilst her mother has been crazy and her father has been mostly absent working for the FBI. I loved the relationship she had with her younger brother whom she thought the world of and actually longed to sweep in there and mother them both (yes I am getting old). I also loved her best friend Alex and the way in which they supported each other throughout the entire book.

One thing I also loved about this book was Ben the resident odd boy turned gorgeous love interest. Seeing his transformation through Janelle's eyes. The chemistry between the two was sizzling in places and it made me desperate to see where their story would go.

On the note of getting older the character I actually really loved was Strutz Janelle's father's partner at the FBI. Can we have an adult spin-off which is based on him and his general gorgeousness?

What I also liked about this book was that when the action kicked off boy did it kick ff. I got to the point where I couldn't put the book down and needed to keep reading to find out what happened next. The only think that irked me a little was when Janelle when mini FBI agent. While I loved her spirit that meant she had the guts to do that I didn't think it was all that realistic and I generally thought it was a little odd.

The end of the story was good but left on a killer of a cliffhanger. I can't see that a sequel won't happen (even though I can't find anything about one yet online) but if it doesn't I will be very cross indeed.

Anonymous said…
I've wanted to read this for a while, and have been entering as many giveaways as I can! :)
Great review, makes me want to read it even more!
4 August 2012 at 13:30

Michelle Fluttering Butterflies said…
Hurrah! I really loved this one as well! Actiony and romantic and fantastic.
17 August 2012 at 14:57