July 21, 2012
Before I started writing this, I had a peek through some of the other bookcases on this blog and have ended up with a bit of a complex. I certainly don’t have as many books as some folk. My Ikea shelving is a bit cheap and shoddy and I’m worried people will laugh at the size of my graphic novel collection. Here goes anyway. 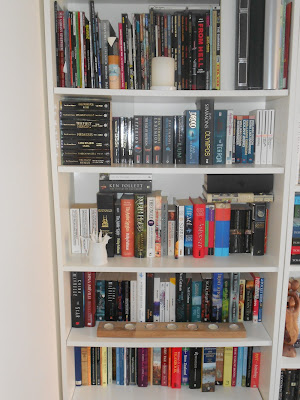 Space is a bit of an issue in our house, so books really have to earn their place on these shelves. I tend to only keep books that I want to read again- even though I know I’ll never get a chance to until I actually retire. I also tend to get a bit OCD with my book organisation, as you can see. I did have every shelf sorted into sections, but when my daughter was a toddler she discovered the joy of throwing any book she could reach onto the floor, so all that went out the window.

The shelves she couldn’t reach are still in good order though, and you can spot my graphic novels at the top (Preacher, Sandman and some Alan Moore). There’s also a clutch of H.P.Lovecrafts and Harry Potters, some Dan Simmons and William Gibson, and also a bunch of Horus Heresy novels. I love a bit of gothic sci-fi, me. 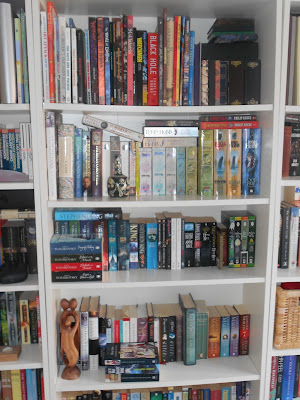 This shelf starts off with some more graphic novels, some old RPG books from when I was a massively geeky teenager, and lots of photo albums. The next layer has a section of Victorian history that I used for research when writing ‘Freaks’, and a big bunch of Robin Hobb books. (Two of them signed- I am such a fanboy). Further down are Stephen King, George R.R.Martin and Tolkein, and just out of shot at the bottom is a mixed up mess that used to be my poetry and 19th century books. Culture-tastic. 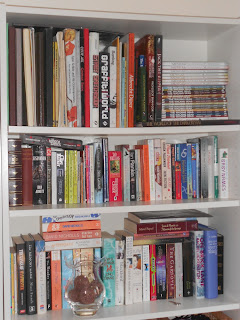 This bookcase starts off with my sketchbooks, then a load of proper art books, including a few on graffiti. I’ve never actually done any actual street art, but it’s on my bucket list.

At the end are my Walking Dead and Nausicaa collections- both infinitely better than the film/TV versions. The shelf below is a bit of a mish-mash. There’s some of Philip Reeve’s Mortal Engines books, and some really old ones that I’ve had since I was a child. The Hounds of the Morrigan, The Borribles and some Fighting Fantasy books. I think there’s a couple of Moomin ones too. It’s amazing how just flicking through them can transport you right back. Books are so much more than just stories.

The shelf below that is where my wife is starting to encroach on my book space with some of her paperbacks. Next time she’s out, I think a sneaky trip to the charity shop is in order. I have a pile of twenty or so other books upstairs that need those slots more than she does…

So, that’s my little personal library. Hope you enjoyed the tour, and didn’t judge me too badly. It’s quality, not quantity, you know.

You might also notice the lack of plastic figures and other cool nick-nacks. That’s because it’s situated in our front room, and apparently the only ornaments allowed there are strangely shaped wooden things and scented candles. If I ever get a writing studio of my own, then there’s a cardboard box in the loft full of Spawn figures and Buzz Lightyear dolls that are definitely coming out. Until then, I’ll have to put up with the potpourri.

Unknown said…
Thank you for the tour, Kieran! Given the significant shelf-bend, I think you have a case for another Ikea flatpack!
TH
25 July 2012 at 06:45