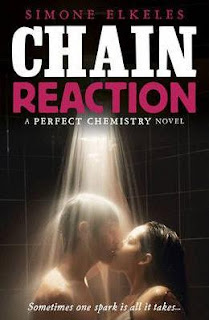 Like his brothers, Luis Fuentes is a risk taker; whether he's scaling the Rocky Mountains or dreaming of a future as an astronaut, Luis is always looking for the next thrill. Nikki Cruz lives her life by certain rules -, don't trust a boy who says "I love you", boys lie to get their own way and never date a boy from the south side of Fairfield. Then she meets Luis at his brother Alex's wedding and suddenly she's tempted to break all her rules. Getting Nikki to give him a chance is Luis's biggest challenge, until he finds himself targeted by the head of the gang that nearly destroyed his brothers' lives. Will Luis's feelings for Nikki be enough to stop him from entering a dark and violent world that could prove to be the ultimate risk?


***
I loved Chain Reaction! It was absolutely as good as the previous two books in the series and I enjoyed it thoroughly!

I love this series because the boys in it are smoking hot and the girls are really interesting characters (to be fair the boys are interesting too) and I love getting drawn into the relationships formed by the two lead characters which are never straight forward and easy and all that bit more compelling for being that way.

Luis and Nikki's relationship in this book is really compelling. As with the previous titles in the series they aren't the obvious couple being worlds apart - Nikki from the rich end of town and Luis from the poor end. They clearly have a connection from the first moment they meet but there are too many other things getting in the way in the form of gang connections, drugs and insecurities from previous relationships. That said from the outset you want to root for them as a couple and hope that they can work it out.

Be warned this book is hot! There were scenes that were completely steamy (I've come to expect nothing else from this series) and you'll find yourself melting whilst reading them. I also enjoyed the action and the twists and turns along the way which kept me guessing right up until the end. I like that even though you kind of know where the book is going that you are kept on your toes about how the characters are actually going to get there.

I love the cameos by the elder brothers from the series and the cheesy side of me kind of loves the epilogues despite the fact that they are so cheesy.

Move over Alex and Carlos! I think I have a new favourite Fuentes brother!