So… dream casting. I’m not sure I have a dream cast, is the problem! And I don’t like trying to dictate other people’s imaginations: I want people to imagine the characters the way they like. We’re not all alike… I don’t know what traits others will find attractive.

However, I mean, I do mention certain stuff about the characters. How we look affects how we interact with the world: I thought it would be cool for people to have a rough guide of the people who populate Unspoken, a Gothic mystery about a sassy reporter who finds out her imaginary friend is a real boy.

So I found an artist I liked, the lovely Jasmin Darnell (http://www.jasmindarnell.com/) and I asked her if she’d draw some pictures of my characters.

JASMIN: Sure! Do you maybe want to send me pictures of actors who look like them?
SARAH: I STARE INTO THE ABYSS! It stares back at me! The curse has fallen upon me, cried the lady of Shalott! Arghargagharagh….
JASMIN: Or not… I mean, it’s cool…
SARAH: No, I’ll do it.  *sniffs* I’m brave and strong! I can do it!

So I do have a few suggestions for actors, after all. And I thought it might be fun to show you guys how the pictures were produced! Also, as will become clear, I need some help with some of these. Suggestions. Votes. Being told I’m bad at picking actors and I should feel bad.

This is the brief I gave my artist for my heroine, a sassy girl reporter who has to investigate sketchy goings-on in the Gothic manor and the small matter of her imaginary friend turning out to be a real boy…

It was important to find me some actresses of Japanese descent! Because Kami is, and looks like she is, and it’s an important part of her identity and how she feels about her place in her small English town and in the world generally. I also wanted actresses who looked like they had or could project an attitude similar to Kami’s: someone cheerful but take-charge, a bit of a glint in her eye.

And here these lovely ladies are. 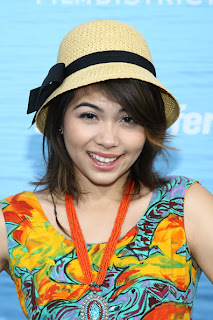 Hayley Kiyoko (who also played Velma in a Scooby Doo movie, so she has Lady Detective expertise). 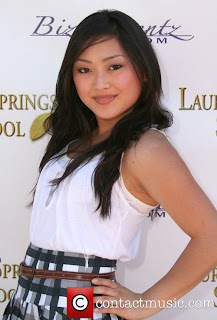 Sophie Oda (is it OK to say that I like that she has… more curves than some actresses? I mean obviously she’s skinny but… it’s hard to find… This is a compliment not an insult… SORRY TO OBJECTIFY YOU, SOPHIE!) 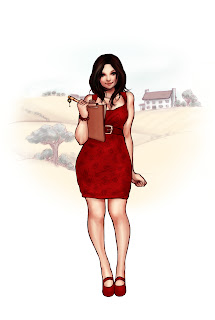 And this is how the picture turned out. Yay for my artist showing a lady with curves!

We had real difficulties with Jared. One picture got thrown out so we could start again, because I was like ‘I didn’t mean sad in a sensitive and lonely way… I meant sad in a more might-burn-down-the-school way?’ (Getting the attitude right is important! Also in unrelated news, Jasmin Darnell may now be slightly frightened of me.)

Really, what is a Gothic hero without a scar? And it was interesting for me to consider how being scarred would affect a 17 year old boy, rather than the classic Gothic hero, A Man Who Had Wenched Around Europe and Maybe Killed His Wife. (I admit Jared has maybe killed somebody. But he hasn’t wenched around Europe…. Probably he’d be in a better mood if he had.) 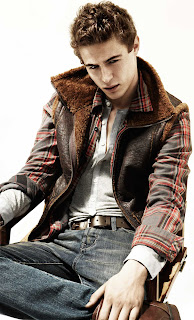 Max Irons (is it OK to say Max Irons? I mean, since this is a dream. I know Stephenie Meyer has dibs in real life, and that she can send a ninja death squad after me. I just like his angular, strange and difficult face.) 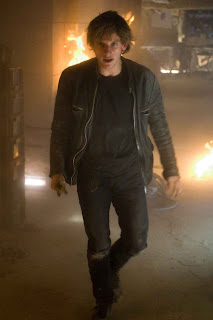 Jamie Bell (short, I know, but look at this picture: he had ‘might burn down the school’ written all over him in Jumper. Don’t see the movie Jumper, also. Jamie Bell’s the only good bit. You have been warned!) 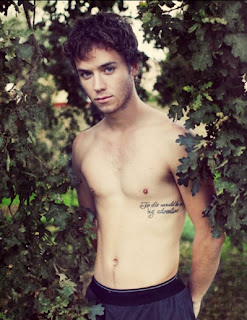 Jeremy Sumpter (I apologise to any scandalized maidens. The shirtlessness is a key part of Jared’s character.) 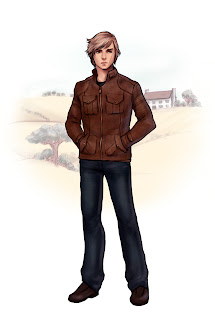 Then we have our heroine’s BFF, a key part of her crime-solving team! (She’s mostly the Taking Time Off To Nap division.)

It’s hard to find a lady who looks like she will apply eyeliner perfectly and then stab you with the eyeliner pencil if you vex her. 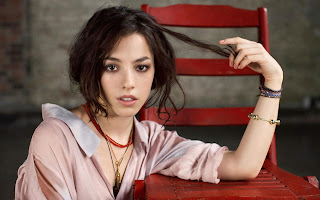 Olivia Thirlby, good job on that drop-dead stare and also your face, lady. 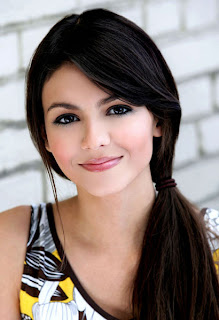 Victoria Justice, well, less sure about this one (what do YOU think, gentle viewers?) but I like to think she’s imagining how to hurt people behind her eyes… 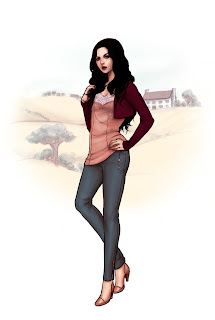 The Lynburns are the family who live in the Gothic manor on the hill above Kami’s town and have just returned from America after a 17-year absence. They brought back not one but two good-looking teenage boys. (I mean… their sons. They didn’t buy them on craigslist…)
Ash Lynburn - Jared's cousin, looks like him but lighter hair and paler skin and also handsomer, slimmer and less muscular, slightly more formal clothes (button-down shirts &c), very charming, very handsome. The dreamiest boy in dreamytown, basically.

Somebody has to have some manners in this book, and Ash’s number is up. Poor Ash, lover of beautiful things and smooth talker, doesn’t really get on with his cousin. But hey. He can always hang out with the nice girls from the school newspaper. 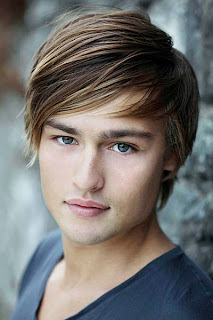 Douglas Booth. Looks charming and classy, and has that feeling I wished to show Ash inspiring. Like, having a totally normal conversation with him you might break off in the middle and be like ‘Sorry, what? I’m confused. You’re very handsome.’ 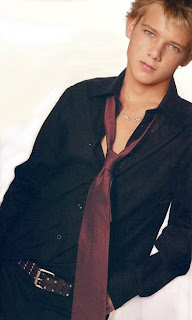 Max Thieriot. Such Ash clothes! Except for the little pimp chain. Dunno what that’s about… 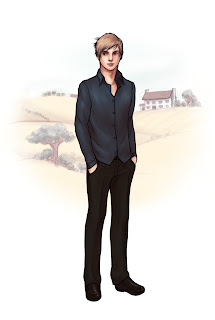 And here is the picture of our silver-tongued devil.

And every crimefighting team needs a lady willing to vamp people on occasion. Plus I was tired of seeing cute blondes who were popular with the boys as the enemy! I wanted a lady with a sweet smile as well as sex appeal. 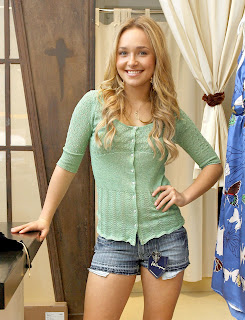 Hayden Panettiere. Awesome as Claire on Heroes (isn’t it strange that show only ever had the one really good first season? Just that one? Shhh.) and in Scream 4. 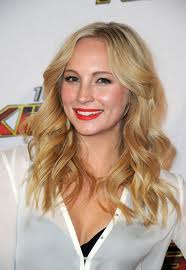 Candice Accola. I love, love, love her as Caroline on the Vampire Diaries. Maybe my favourite character. (Probably be a better date than Damon…) 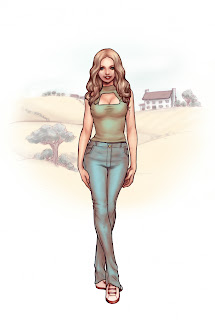 Rusty Montgomery, Angela's brother, looks like her but with red highlights in hair, lazy and the epitome of good nature, tall and muscular also, teaches self-defence, wears lots of sweatshirts and slobs around, tall dark and mostly, handsomely asleep…

I have dreamcast someone and forgotten who he is! This is the kind of amazing brainpower you can expect from me. 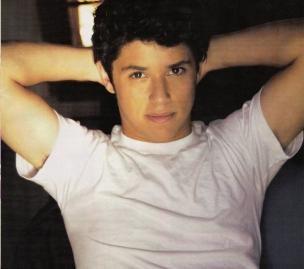 Who is this mystery man? I sent a picture of him to the artist, but I no longer know who he is… I like his louche airs, though! 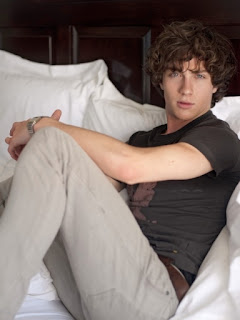 Blue eyes, but so louche! So louche! I like me some Aaron Johnson. When is the sequel to Kickass coming out? 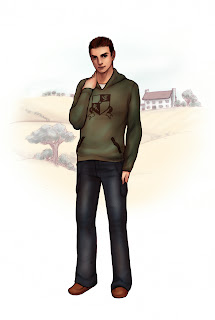 So now you all know far more than you needed to know about the way you get people to draw pictures, the movies (some terrible, terrible movies) that I watch, and have a vague idea of the people you might meet should you read Unspoken.

Which of the choices do you like best? Do you have better suggestions for me? WHO IS THAT MYSTERY MAN?

Krista said…
It's Ricky Ullman, star of the (in my most humble of opinions) best Disney Channel show ever, Phil of the Future! (And apparently grown up quite well.)
14 September 2012 at 16:49

I loved Kami's fashion style in Unspoken and she is so adorably sassy ^_^. It's just so awesome that she can totally beat you up while donning a dress with polka dots and kitten heels.