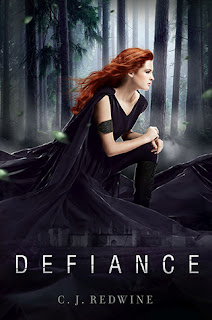 Within the walls of Baalboden, beneath the shadow of the city's brutal leader, Rachel Adams has a secret. While other girls sew dresses and obey their male Protectors, Rachel knows how to survive in the wilderness and deftly wield a sword. When her father, Jared, fails to return from a courier mission and is declared dead, the Commander assigns Rachel a new Protector, her father's apprentice, Logan--the same boy Rachel declared her love for two years ago, and the same one who handed her heart right back to her. Left with nothing but a fierce belief in her father's survival, Rachel decides to escape and find him herself. But treason against the Commander carries a heavy price, and what awaits her in the Wasteland could destroy her.

At nineteen, Logan McEntire is many things. Orphan. Outcast. Inventor. As apprentice to the city's top courier, Logan is focused on learning his trade so he can escape the tyranny of Baalboden. But his plan never included being responsible for his mentor's impulsive daughter. Logan is determined to protect her, but when his escape plan goes wrong and Rachel pays the price, he realizes he has more at stake than disappointing Jared.

As Rachel and Logan battle their way through the Wasteland, stalked by a monster that can't be killed and an army of assassins out for blood, they discover romance, heartbreak, and a truth that will incite a war decades in the making.

For me Defiance was another in a long line of the many many dystopian / paranormal romance books that I have been working my way through. While it was engaging enough to keep me reading until the end it didn't wow me at all.

For me the thing I found most fascinating about this book was whole in which the book was set. The people live in closed off cities under the tyrannical rules of the leaders and living in constant fear of the monsters that are outside of the city. The system treats women like second class citizens and hands out punishments at the whim of the commander whose word is law.

The main character rachel is awesome. She is feisty and kick ass and doesn't let the sexist system she lives in beat her. I loved her strength and the way she went about trying to make things better for her.

I loved loved loved Logan. The boy is gorgeous on every single level as well as clever. I love the way in which he treats Rachel and I loved seeing how their relationship develops over the course of the book.

The main storyline was pacey and exciting but for me I found it a bit forced and nothing especially different from all the other YA books of a similar genre to stand out in any way.

All in all an ok read for me but nothing special.