September 30, 2012
As you might already know I broke my leg at the end of August so this month has been an insane reading month as I've literally just sat in a chair all month.

Book of the Month
Got to be Secrets and Sapphires by Leila Rasheed. Very much one for you if you like Downton Abbey. I loved it but you'll have to wait until January for it. 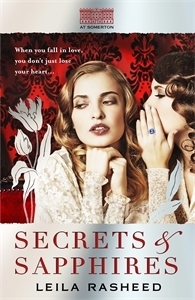 Book Events
Obviously attended none in my broken legged state :(

The Insouciant Sophisticate said…
Awesome list! September has actually been my worst reading month so far this year. I need to make reading more of a priority for October. I hope your leg is healing apace!
30 September 2012 at 14:54

Nikki in Niagara said…
September has been horrible reading for me too! Cograts on the broken leg ;-) Must feel good to get all that reading accomplished!
30 September 2012 at 16:04