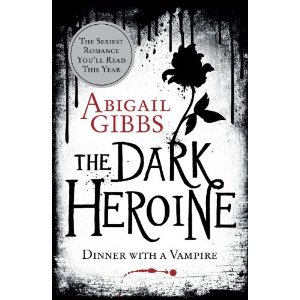 Violet Lee is the sole living witness to a horrific pre-dawn mass murder in Trafalgar Square, London. But before she can alert the authorities, she is taken by the group of murderers, who, to her shock, are vampires. Kidnapped, Violet is forced to live among them, for they've discover she is the daughter of the UK's Secretary of State for Defense…who has been secretly dealing with the vampires for years. Now a pawn in a game of politics between humans and vampires, Violet begins to doubt her allegiance, especially when she begins to fall for Prince Kaspar, the heir to the throne of the vampire world, as well as his best friend, Fabian. Swept into a complex love triangle, will Violet leave her newfound life, or return to the human world?

The Dark Heroine is an interesting read. It was a bit of a novel read for me as I just assumed it was a YA novel when it was pitched to me as that's what I read and review 98% of the time but it soon became clear that it definitely was not a YA read, not a problem as such just not what I was initally expecting. That said it definitely has cross over appeal especially when you consider the age of the author and I think a lot of older YA readers will enjoy it.


This vampire novel has its own spin on the whole vampire genre with its own ideas about the whole of vampires which I found really interesting. It is fast paced an explosive from day one and has a host of interesting characters that hooked me at the start. I enjoyed Violet's spirit and following her story as she got deeper and deeper into the vampire world.

That said there were a few things that irked me about the book and as it went they bothered me. Firstly I just did not get the relationship between Violet and Kasper at all he is this cold and arrogant blood-sucker who has a really nasty side to me yet violet ends up head over heels for him and gives up everything for him.
This left me with a really uncomfortable edge especially during the more intimate scenes where I actually felt a bit cringey.

The end of the book leaves the story wide open for the sequel and has set up loads of interesting ideas. A sequel that I certainly would consider reading to see what happens next.