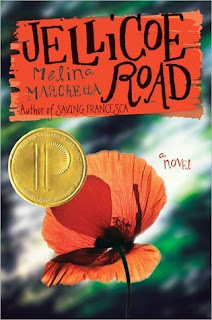 At age eleven, Taylor Markham was abandoned by her mother. At fourteen, she ran away from boarding school, only to be tracked down and brought back by a mysterious stranger. Now seventeen, Taylor's the reluctant leader of her school's underground community, whose annual territory war with the Townies and visiting Cadets has just begun. This year, though, the Cadets are led by Jonah Griggs, and Taylor can't avoid his intense gaze for long. To make matters worse, Hannah, the one adult Taylor trusts, has disappeared. But if Taylor can piece together the clues Hannah left behind, the truth she uncovers might not just settle her past, but also change her future.

This book was an interesting read for me and. Read it purely because a friend said I should and stuck with it because everyone said I should even when I wanted to give up and I'm glad I did.

I found that the first 150 pages were really really confusing. I literally didn't have a clue what was going on, who anyone was or why they were doing the things they were. The writing was really beautiful and strangely intense but I was just so confused and had I not been recommended the book by someone else I probably would have given up at this point.

Suddenly after all the time of confusion things started to click into place and I started to get what was going on, who was who and how the whole narrative fit together which made it so much easier for me as a reader to connect to the book. Once I got to that part I was drawn in and completely fascinated by what was happening to the point where I needed to keep reading to find out more about the characters and how everything linked up which was done so cleverly.

I realise this review actually tells you very little about the book itself. It's because I can't work out ow to put everything into words. All I'll leave you with is the idea that this definitely is a book worth reading and pushing through because by the end you'll be left needing more and wanting to read it again straight away.

Deborah Julene said…
I felt the same way! The first hundred or so pages I was so confused. But then suddenly everything clicked and I was able to enjoy the amazing story. Glad you liked it!

Raimy from Readaraptor Hatchling said…
hmmm sounds interesting… I have heard amazing things about this book but I'm not sure I could be bothered sticking with it if it doesnt really kick in til 150 pages in!
30 September 2012 at 11:57

Penelope Sanchez said…
Marchetta is a master at what many authors try to do but most don’t accomplish. She makes you live the story. She doesn’t tell you what happens, she shows you everything, makes you feel it along with the characters. She is quickly becoming one of my favorite authors of all time.