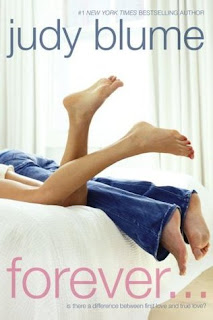 Katherine and Michael meet at a New Year's Eve party. They're attracted to each other, they grow to love each other. And once they've decided their love is forever, they make love.

It's the beginning of an intense and exclusive relationship, with a future all planned. Until Katherine's parents insist that she and Michael put their love to the test with a summer apart...

"Forever" is written for an older age group than Judy Blume's other novels for children. It caused a storm of controversy when it was first published because of its explicit sexual content.

I read this book purely because whenever anyone mentions Judy Blume to me they talk about this book. Don't get me wrong I can certainly see why at the time of the release and even up to maybe 10 years there was a lot of fuss made. For the time the way in which it deals with teenage sex must have been very controversial and I certainly cannot think of anything published at the same time that I've read that compares to it.

However I'm not sure this book really stands the test of time especially in an ever increasing YA market where the quality of the books written just gets better and better. For me the characters and the plot were not developed enough and the story itself therefore felt like it was lacking. The way in which it looks at teenage sex again is very reserved and in the day and age we live in where teenagers can access anything and everything via the Internet I don't think it really goes far enough to educate the modern teenager about the types of situations and choices they might be faced with.

All in all possibly one for you if you read it as a child due to the nostalgia but other than that not one I'd recommend.

Jim said…
Great review - I read this for the first time last year and don't think it's held up particularly well, either.
2 September 2012 at 10:16

Mel said…
I remember reading it as a teenager and it was the only type of book like it on the market. I'd be reluctant to read it now as you say it would feel dated in a digital age. But during the 80s and early 90s it was stand out! :-)
2 September 2012 at 11:35

Unpublished Life said…
This book has massive nostalgic value for me and was perhaps the first 'naughty' book I ever read. Up until then it was just kisses and fading into the sunset. I'm not sure the book will stand the test of time, like you said, as the quality and quantity of YA fiction being produced is phenomenal, but I will never forget that gold cover ...

The Insouciant Sophisticate said…
I think this book does get its buzz from its controversial nature when first being published. I agree that there are a lot better books out there but I hope this one continues to remind people to push and try new things like Blume did.
2 September 2012 at 15:16