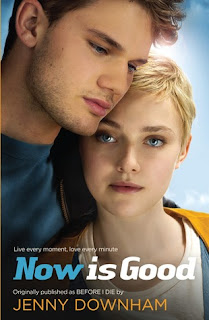 Tessa has just months to live. Fighting back against hospital visits, endless tests, drugs with excruciating side-effects, Tessa compiles a list. It’s her To Do Before I Die list. And number one is Sex. Released from the constraints of ‘normal’ life, Tessa tastes new experiences to make her feel alive while her failing body struggles to keep up. Tessa’s feelings, her relationships with her father and brother, her estranged mother, her best friend, and her new boyfriend, all are painfully crystallised in the precious weeks before Tessa’s time finally runs out.

I read Before I Die by Jenny Downham years ago. I loved it to pieces and was especially excited to find out that a film adaption of the book was coming out under the title Now is Good starring Dakota Fanning this September. I was even more excited to be invited to a preview screening in August at Warner Bros headquarters in London.

The film itself is a brilliant adaption of the book. For me it covers all the key parts of the story well without leaving out anything too vital from the book. For me it captured the relationship between Tessa and Adam perfectly. I loved  the scenes involving the two of them and Jeremy Irvine stole the show for me everytime he walked onto the screen flashing that heart breakingly gorgeous smile.

A warning for the blood phobic out there, my friend who doesn't like needles or blood passed out in the cinema during one scene and I've heard on the grapevine she wasn't the only person who has done that.

The film itself, as you'd expect, is utterly heart-breaking especially in those final few scenes when you see the effect that Tessa's death is going to have on her immediate family and friends. I don't think there was a dry eye in the house by the end credits.

TG said…
I saw this is London last week. I haven't read Before I Die, though (but I'm planning to). Now is Good was absolutely heartbreaking and you're right, there wasn't a dry eye in my cinema, either. Lots of people were still sitting and trying to pull themselves together long after the credits rolled. Dakota Fanning's performance was brilliant.
19 September 2012 at 09:49

Sarah said…
I still can't believe I passed out in the cinema! I'm now a bit nervous of going to see any other films in case it happens again LOL. You really can't take me anywhere *sigh*
19 September 2012 at 19:35

Michelle Fluttering Butterflies said…
I really can't wait to see this one! Wish I was able to see it with some bookish friends, but I know nobody locally :( Still, might have to drag N to see it with me..
20 September 2012 at 09:57