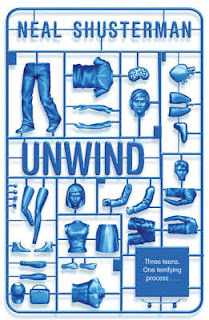 In a society where unwanted teens are salvaged for their body parts, three runaways fight the system that would "unwind" them.

Connor's parents want to be rid of him because he's a troublemaker. Risa has no parents and is being unwound to cut orphanage costs. Lev's unwinding has been planned since his birth, as part of his family's strict religion. Brought together by chance, and kept together by desperation, these three unlikely companions make a harrowing cross-country journey, knowing their lives hang in the balance. If they can survive until their eighteenth birthday, they can't be harmed -- but when every piece of them, from their hands to their hearts, are wanted by a world gone mad, eighteen seems far, far away.

Unwind is a really creepy read and one of the better dystopian novels I've read. The ideas behind the world were terrifying easy to imagine and really quite harrowing in places.

Unwind is set in a world where teenagers between 13 and 18 can be sent by their parents to be unwound, for whatever reason their parents might have, to have their body parts used to help someone else. The story revolves around three teenagers who are being unwound for several different reasons, one because he has been a trouble makers, a girl who is an author and another who is a religious sacrifice. The story follows them as they escape and try to find a way to not be unwound.

Fr me the things I found fascinating about this book was the different perspectives they had on their situations and I was particularly fascinated with the story of the boy would was tithed by his parents to be unwound for religious reasons. The whole angle was a really interesting comment on how far people are willing to go in the name of religion.

The book was particularly harrowing when it looked at the whole process of being unwound which is both terrifying and graphic without being gory.

A harrowing dystopian novel which was fascinating to read

Michelle Fluttering Butterflies said…
I didn't really like this one. I thought it was a really interesting idea and I liked the characters, but I didn't find myself feeling emotionally involved in the story at all. Which is a shame, because everyone raves about it..
21 September 2012 at 11:26