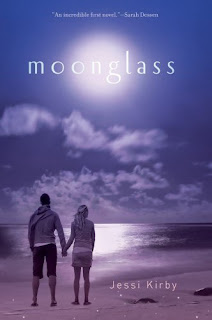 From Jessi Kirby, a debut novel about confronting the past in order to move ahead.

I read once that water is a symbol for emotions. And for a while now, I've thought maybe my mother drowned in both.

Anna's life is upended when her father accepts a job transfer the summer before her junior year. It's bad enough that she has to leave her friends and her life behind, but her dad is moving them to the beach where her parents first met and fell in love- a place awash in memories that Anna would just as soon leave under the surface.
While life on the beach is pretty great, with ocean views and one adorable lifeguard in particular, there are also family secrets that were buried along the shore years ago. And the ebb and flow of the ocean's tide means that nothing- not the sea glass that she collects on the sand and not the truths behind Anna's mother's death- stays buried forever.

Michelle Santiago said…
i really like the differing purple on the cover of this book. and it sounds like a good read too. great pick :)

Liz said…
I'm looking forward to this one, too!

Michelle Fluttering Butterflies said…
Wow, I was about to skip over this post as I've never heard of the book or seen the cover, but it sounds really good. I just looked up the pub date, and it's out in May, how exciting. It's been added to my wishlist :) Thanks for sharing this one.
25 March 2011 at 10:43