Review: I know what you did last Summer by Lois Duncan

March 15, 2011
I know what you did last summer by Lois Duncan
Published by ATOM
Challenge: None
Source: Review copy (Thank you ATOM) 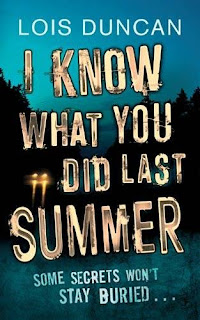 It was only an accident -- but it would change their lives forever. Last summer, four terrified friends made a desperate pact to conceal a shocking secret. But some secrets don't stay buried, and someone has learned the truth. Someone bent on revenge. This summer, the horror is only beginning....


***
I picked up this book worried about what I might be letting myself in for. I saw the film adaption a while back and didn't think it was all that great. I am pleased to say it was nothing like the book at all and I really enjoyed it.

The book is similar to the film in that a group of 4 friends are involved in covering up a fatal accident they had been part of a year or so previously. The group have since started to receive mysterious letters and taunting amongst other things as the story progresses which they think are linked to the fact that they covered up the accident.

The story itself is much more psychological thriller than slasher gory thriller and more me it made the story much more clever than the film could ever claim to be. There were parts of the story where you weren't quite sure what was going on.

The final twist was really good and one I didn't spot coming until it almost happened. I liked how this book kept you guessing throughout!

All in all an fab book which deserves better recognition than it currently has as it is a far superior version to the film that everyone seems to have read of!

Kate @Midnight Book Girl said…
I love Lois Duncan! My favorite (which I think I'm going to re-read during the upcoming Readathon) is The Third Eye. Duncan also has a heart-breaking true crime book based on her daughter's murder called Who Killed My Daughter?. She's one of my favorite authors from back when I was a teenager, and I still enjoy her books.

I remember being horrified, and not in a good way, when I saw the movie adaption of I Know What You Did Last Summer, the book is a million times better.
15 March 2011 at 01:14

Daisy said…
Oh gosh, the movie was all the rage when I was 13 or 14 years old. I remember that we watched it at every birthday party... The meat hook was just horrible.
I'm glad the book was better, while I enjoyed the movie for what it was, I don't think reading the same thing would be nice.
15 March 2011 at 07:02

Mel said…
Glad you liked the book! I read as a teen before tge film came out and thought it was very scary. The film wasn't so memorable to me. I may now pick it up again if it still has a good story after all these years - thanks!
15 March 2011 at 07:16

Unknown said…
The movie is defiantely something I wouldnt watch as I cant cope with gore. The book certainly sounds much better than the movie :D
15 March 2011 at 08:58

I'm Kate Evangelista, author of Taste, and I just wanted to take this time to introduce myself. If you have the time, please stop by The Coffee Bar by using the link below:

I hope to see you there.

YA Book Queen said…
I have to admit, your review has me intrigued! I'll definitely be checking it out, since it sounds way better than the movie. Great review! :)
19 March 2011 at 15:38

Michelle Fluttering Butterflies said…
I'm pretty sure I read this book as a teenager. I absolutely loved Lois Duncan and scary books in general. But I think after watching the movie, all thoughts of the book left my head. It's interesting that this book was chosen to be rereleased! I'm glad you enjoyed it :)
25 March 2011 at 10:40