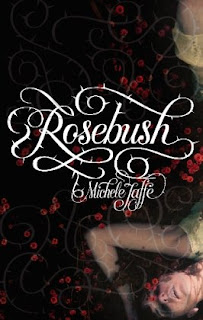 Instead of celebrating Memorial Day weekend on the Jersey shore, Jane is in the hospital surrounded by teddy bears, trying to piece together what happened last night. One minute she was at a party, wearing fairy wings and cuddling with her boyfriend. The next, she was lying near-dead in a rosebush after a hit and run.

Everyone thinks it was an accident, despite the phone threats Jane swears were real. But the truth is a thorny thing. As Jane's boyfriend, friends, and admirers come to visit, more memories surface--not just from the party, but from deeper in her past...including the night her best friend Bonnie died.

With nearly everyone in her life a suspect now, Jane must unravel the mystery before her killer attacks again. Along the way, she is forced to examine the consequences of her life choices in this compulsively readable thriller.


***
Rosebush is an awesome read with a fab suspenseful storyline and a cracking resolution to finish it all off.

Rosebush is a novel told from the point of view of Jane, a girl who was almost killed in a hit and run accident, as she starts to piece together what happened to her on the night of her accident. I really liked how it alternated between present day and flashbacks to different events in Jane's life and keeps you guessing about what really happened and who was behind everything as the story goes on.

Jane appears to have it all: Perfect friends, a fantastic boyfriend and a lifestyle others envied. The flashback side of this story starts with this notion and shows you Jane's friends and her life as one of the most popular girls in school. But, and this is one of the things I liked most about it, as the story progresses you learn that things aren't as perfect as they seem. I don't think I can tell you anything as it would start to give things away but I loved getting into the life of these girls who seemed to have it all and find out a lot more about them.

One things this book also does well is that it is really creepy and keeps you guessing. I didn't see the ending coming and didn't even begin to think the person who tried to kill Jane was a suspect. That therefore meant I spent a lot of the book wondering who would have the motives to go after Jane and then I kept suspecting everyone. When the would be killer was finally revealed I was stunned to say the least but liked how everything slot into place in the end.

All in all an awesome psychological thriller that I would thoroughly recommend!

Ynysawdre Elderly Residents Association said…
@Keris has gifted this too me - I adore the cover such a great review I am desperately re-shuffling again :D
12 March 2011 at 10:15

Michelle Fluttering Butterflies said…
This one has such a pretty cover and sounds so great. I'm really considering moving it up my TBR pile. Thanks for the great review.
14 March 2011 at 10:22