March 06, 2011
Thank you as always to Kristi for hosting In my mailbox www.thestorysiren.com


Not a huge busy week for me for books but the ones I receive were awesome ones!

This one looks really awesome - I have never read anything by Mary Hoffman but I've told she's good. 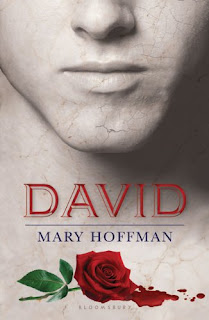 Michelangelo’s statue of David is famous around the world. Millions flock to Italy every year to admire the physical perfection of the young man captured within the marble. But the identity of the model has never been known . . . until now. In this epic tale, acclaimed author Mary Hoffman imagines the story of Gabriele, a naïve but incredibly handsome young man who is hired as Michelangelo’s model, only to find himself drawn into a world of spies, political treachery, and murder. Set against the vibrant backdrop of Florence in its most turbulent times, this is a rich, colorful and thrilling tale that gives life to one of the world’s greatest masterpieces.

I have been waiting soooo long for this! The first copy that was put in the post got lost. I was so excited to finally get it yesterday morning. I first heard about it at the RHCB bloggers brunch. I am told Nick is generally a bit too gorgeous! 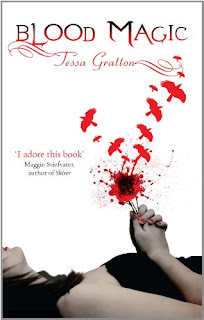 For Nick Pardee and Silla Kennicot, the cemetery is the center of everything. Nick is a city boy angry at being forced to move back to the nowhere town of Yaleylah, Missouri where he grew up. He can’t help remembering his mom and the blood magic she practiced – memories he’s tried for five years to escape. Silla, though, doesn’t want to forget; her parents’ apparent murder-suicide left her numb and needing answers. When a book of magic spells in her dad’s handwriting appears on her doorstep, she sees her chance to unravel the mystery of their deaths. Together they plunge into the world of dark magic, but when a hundred-year-old blood witch comes hunting for the bones of Silla’s parents and the spell book, Nick and Silla will have to let go of everything they believe about who they are, the nature of life and death, and the deadly secrets that hide in blood.

Where She Went by Gayle Forman (UK paperback)

I don't think I need to say anything about this! Very very excited to read it! 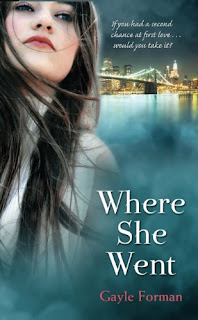 It's been three years since the devastating accident . . . three years since Mia walked out of Adam's life forever.  Now living on opposite coasts, Mia is Juilliard's rising star and Adam is LA tabloid fodder, thanks to his new rock star status and celebrity girlfriend. When Adam gets stuck in New York by himself, chance brings the couple together again, for one last night. As they explore the city that has become Mia's home, Adam and Mia revisit the past and open their hearts to the future and each other. Told from Adam's point of view in the spare, lyrical prose that defined If I Stay, Where She Went explores the devastation of grief, the promise of new hope, and the flame of rekindled romance.

While you're here please check out my new saturday feature Bookcase Showcase which started yesterday. If you want to be featured please drop me an email and let me know!

Anonymous said…
Great list! I haven't heard of the first 2, but got an ARC of Where She Went from Gayle Forman a while back and absolutely loved it. Enjoy!
6 March 2011 at 00:05

Julia @ That Hapa Chick said…
WHERE SHE WENT!!!! Can't wait for that one! You are so lucky to get a copy. And wow that David book sounds so intriguing. Definitely interested in that one. :)
6 March 2011 at 00:22

Rebecca said…
Great books you got this week. Blood Magic is one book I cannot wait to read. Hope you enjoy reading all your books.
6 March 2011 at 05:55

Sally said…
Great books!
So jealous of Where She Went. Already pre-ordered my copy.
Haven't heard of the other two books - will have to check them out.
Sally.
http://theelifylop.blogspot.com/2011/03/in-my-mailbox-9.html
6 March 2011 at 08:29

Carla said…
Where She Went is like amazingly good. Like SPLAT your brain is gonna explode from all the awesome. And yeah, Tessa Gratton pretty much rocks my socks off, so YAY Blood Magic and woah does that David book sound intriguing or what?
6 March 2011 at 09:01

Stephanie (Books Are A Girl's Best Friend) said…
David sounds fantastic, Italy and historical fiction- yes please! I'm looking forward to seeing what you think of it. Enjoy all your new books :)
6 March 2011 at 09:38

Samantha (A Dream of Books) said…
Lovely books this week :) Blood Magic sounds awesome and it's very exciting that you have a copy of Where She Went! I loved If I Stay and have a feeling that the sequel is going to be just as amazing.
6 March 2011 at 12:53

Cicely said…
I want Blood Magic SO BADLY! And David looks brilliant! And Where She Went. *dies from jealousy* ;P
Happy reading!
6 March 2011 at 12:59

Unknown said…
Where She Went is truly awesome :D
I am really interested to see what you think of David - interesting premise there :D
6 March 2011 at 13:35

serendipity_viv said…
Blood Magic has piqued my interest. It looks fabulous. I hope to be reading Where She Went soon.
6 March 2011 at 14:05

Jesse Owen (Reading to Life) said…
Great books this week, I've heard so many good things about Where She Went and I love the sound of Blood Magic.

Michelle Fluttering Butterflies said…
I keep seeing Blood Magic talked about, but not fully convinced as yet. I adored Where She Went!! And wow, doesn't David sound like it'll be incredible?

Brittany @ Nice Girls Read Books said…
Blood Magic and Where She Went? EXTREMELY JEALOUS! I hope you enjoy both - I'm waiting impatiently for them! :P

Aisle B said…
Now you have me curious about Where she Went. Is the girl on the cover an actress?? She looks very familiar...