March 25, 2011
Forsaken by Jana Oliver
Published by Macmillan
Challenge: DAC
Series: The Demon Trappers # 1
Source: Own copy bought with a giftcard my lovely friend Lauren gave me at Christmas 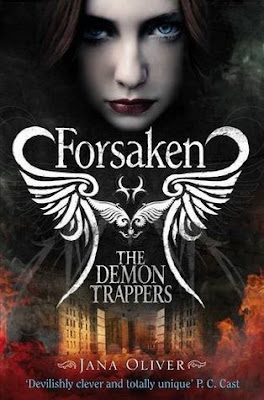 Riley has always wanted to be a Demon Trapper like her father, and she's already following in his footsteps as one of the best. But it's tough being the only girl in an all-guy world, especially when three of those guys start making her life more complicated: Simon, the angelic apprentice who has heaven on his side; Beck, the tough trapper who thinks he's God's gift, and Ori, the strikingly sexy stranger who keeps turning up to save her ass. One thing's for sure - if she doesn't keep her wits about her there'll be hell to pay...


***
Forsaken is the the first book in a series about Demon trappers. The ideas in it are original and the book sets up some fantastic ideas for what could potentially be an awesome series.

From the outset the thing I loved about this book was the dialogue. It made me laugh and chuckle away to myself. It kept me engaged and wanting to carry on with a story which, in all honesty, was a bit slow for the first two thirds of the book.

I loved the three main character Riley, Beck and Simon. Riley was a fab lead. She is this feisty kickass teenage girl but with a soft edge. I loved the contrast between her Demon Trapper fighting edge and her more vulnerable side that you saw at other times. I thought Beck was gorgeous in his gruff manly way and thought Simon was simply adorable.

The final section of the book is where everything picked up. The action in it was fast paced meaning the book itself was unputdownable. I would have liked to have seen more of this throughout the entire book itself but I appreciate it is the first in the series and the author wanted to set up a lot of plot threads. There are certainly a lot of fantastic ideas that have been put into place and I am looking forward to seeing what is done with them in future books.

Ynysawdre Elderly Residents Association said…
Great review. I loved it and cant wait for the next one.
25 March 2011 at 09:24

Michelle Fluttering Butterflies said…
I have this one waiting for me on my bedside table. I've heard nothing but good things about it and I'm really looking forward to it!
25 March 2011 at 10:59

Jan von Harz said…
I really loved this book and cannot wait for more adventures with Riley. I am also quite interested to see where the romance goes next. Great review!
25 March 2011 at 11:46

Admin said…
Great review! I have to pick this one up.

BookGeek said…
I absolutely adored this book! I love the multiple love interests, Riley and the atmosphere. It was gritty and intense and unapologetic. Perfect combo!
29 March 2011 at 16:22