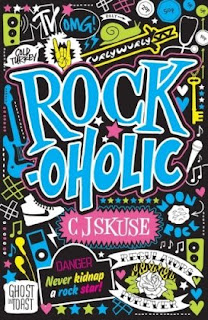 Jody loves Jackson Gatlin. At his only UK rock concert, she’s right at the front. But when she's caught in the crush and carried back stage she has more than concussion to contend with. Throw in a menacing manager, a super-wired super-star, and a curly-wurly, and she finds herself taking home more than just a poster. It’s the accidental kidnapping of the decade. But what happens if you’ve a rock-god in your garage who doesn’t want to leave? Jody’s stuck between a rock-idol and a hard place!

From the pen of C.J. Skuse, author of last year’s super cool debut Pretty Bad Things, comes a tale of rock star obsession gone nuts. Hilariously and sharply explores the fantasy and reality of celebrity obsession through a teenager’s eyes. C. J. Skuse has been billed as the new Nick Hornby for teens.


***
Before picking up this book I had not heard of the author before so started it with no real expectations about what it would be like.

The story follows Jody a teenage girl who goes to see in concert her favourite band, and more importantly, her idol Jackson Gaitlin. A variety of things go wrong and by the end of the evening Jody ends up kidnapping Jackson and taking him home to hide out from the press in her Granddad's garage.

I liked several things about this book. Firstly it was really funny. The one thing I was told about CJ Skuse was that she writes really funny stuff and it's definitely true. The scenes where Jody tries to sort out Jackson when he is in a bad state were really funny (I won't tell you what happened for fear of spoiling it).

I also thought the characters were done really well. I thought the author captured that mad teenage hysteria well and all the crazy things teenagers do (and then probably don't admit to later on!) in order to be a little more like their idols. I thought Mac was a gorgeously brilliant character and I loved his loyalty to Jody and to his younger sister. Jody herself is a real mixed bag and you definitely see her grow as the story progresses.

I also liked the moral this book had to tell about fame and the falseness of it all. Once Jackson came around and started interacting with the other characters you saw how profoundly it had affected everything about him.

All in all a fab little read with a nice and pacey story line and laugh out loud moments combined with a nice moral to the overall story.

Ynysawdre Elderly Residents Association said…
Plus the musicreferences are just awesome. I <3 this book :D cant wait to gett it in the library :D :D And force it into the pupils hands lol
4 March 2011 at 10:28

serendipity_viv said…
I am looking forward to reading this one. Especially as it is funny!
4 March 2011 at 10:51

Vicki said…
I probably wouldn't have picked this one up if I saw it but I've read a couple of reviews that make me think it sounds like a really fun little read and now I want to!
4 March 2011 at 14:34