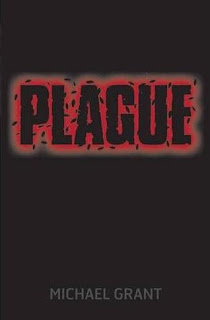 This is a blood-pumping, white-knuckle sci-fi thriller of epic proportions. The FAYZ goes from bad to worse...The darkness has been foiled once again and the resurrected Drake has been contained. But the streets of Perdido Beach are far from safe, with a growing army of mutants fighting against the humans for power in the town. In a small room of a house near the edge of town, Little Pete lies ill on a bed. In his fevered dreams, he continues his battle with the hidden evil that seeks to use his power to bring about anarchy and destruction.


***
I'm going to start by saying I love this series and was thrilled to receive a review copy of it.

This review is as spoiler free as possible although I can't guarantee it won't mention things that could spoil book 1, 2 or 3. If you haven't read those do so (honestly they are awesome) come back to this later.

This series is described as Stephen King, meets heroes, meets Lord of the Flies. Although I personally haven't ever read any Stephen King I would say it is a fair comparison. Grant doesn't shy away from writing what he needs to in order to make the story as realistically gruesome as it needs to be. Some of the scenes are nasty and truly horrific but actually I don't think they are in any way shape or form overdone as I actually think as world in which 15 year olds are in charge would be a pretty terrifying place. There are some parts where I want to keep reading because the action is so gripping but have to brace myself to get through it because it is quite grim in places.

This instalment itself was just as gripping, fast paced and action packed as the first three books. It takes place directly after the first books. The situation for the children of the Fayz is looking increasingly more dire. Food supplies continue to be scare and worse than than water supplies are becoming critical. In addition to these huge problems children have been getting ill, really ill due to a flu like thing and it's spreading fast!

I won't go into details about the plot because I don't want to spoil the book for anyone. All I will say is this. The action is still a fast paced roller coaster ride. there are some brilliant twists and turns (and new abilities) that are awesome. There are still scenes which I are completely horrible and I had to force myself through - it takes some to gross me out but he did it again. What I thought was different about this book though is that I can now see being put into place things that will be big story lines for the finale in two books time. If done well they have the potential to be freaking awesome!!!

All in all another excellent instalment in the Gone series which you certainly will not be disappointed with.

Thank you Egmont for the review copy

Ria said…
I've only read the first one of the series, but it really left an impression on me, and I'm looking forward to being able to buy the rest of them when I get the money. It's good to know that they keep being good instead of going downhill; now I just want them even more!
4 April 2011 at 01:37