April 22, 2011
Today on The Overflowing Library I am pleased to have a guest post from Alex Crow one of the main characters from the awesome debut novel from Clash by Colin Mulhern 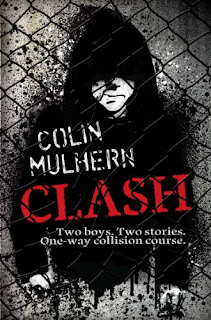 What Makes a Story, by Alex Crow
Colin came to our school when I was in my last year. I was labelled as someone who needed help in writing, which was utter crap because it wasn’t that I couldn’t do it, it was that I didn’t want to. I couldn’t stand English. What’s the point? I mean, poetry and Shakespeare and all that - what sort of job is that going to get me?
So in he comes, all smiling and friendly like he wants to be there and kicks off with, ‘Come on then, what makes a good story?’
‘Isn’t that your job?’ I asked. I was sitting at the side, near the middle – the perfect place to slip out if I got half a chance. There were only six of us in there, so it wasn’t really likely. More force of habit than anything else.
Colin just laughed, said he wanted to know what sort of things they teach us here. I was really pissed off at this. He was trying to embarrass us, rubbing it in that he knew more than we did, so I decided to speak up and show him we weren’t as daft as he thought.
‘Adjectives.’
‘Okay.’ He got up and wrote it down on the white board. ‘What else?’
The others joined in and he ended up with a whole list: verbs, nouns, adverbs, metaphors, scene, dialogue. I was feeling quite good... until he drew a line right through the lot.
‘That’s just naming the parts,’ he said. ‘The technical stuff. The boring stuff.  It makes a story readable, yes, but it isn’t what makes a story. What else do we need?’
I folded my arms. ‘Imagination!’
Colin didn’t give anything away. He just looked at me and said, ‘Do you have a good imagination?’
I sighed. ‘Not really.’
‘So does that mean the kids with great imaginations, the kids who read about fairies and elves and all that, can write better stories than you?’
A girl near me said, ‘Duh. Like, yeah.’
‘You think so?’ He looked surprised. ‘I never really liked those books. Wouldn’t it be great to have a story that isn’t all imagination? Something that was about real people. People like you? What would that be like?’
‘Boring,’ said the kid behind me. The rest of us agreed.
Colin didn’t give up. ‘So you all lead really boring lives, do you? You go home and nothing happens. No excitement, no drama? Nothing to talk about when you get back to school? Come on, I know for a fact that’s not true. Kids do stuff. You have arguments, fights, play stupid games, maybe even dangerous games.’ He started handing out sheets of paper, talking as he did so. ‘Have you ever fallen out of a tree, climbed on a garage roof? Done something that would make your teachers go pale?’ He sat back down. ‘That’s all experience, and when you write about real experiences – even if you tweak them a bit – they read so much better than something you try to make up. So how about it? Tell me a story about you.’
At first I was going to tell him some stuff that happened the other week, but he pushed again, saying, ‘Something no one but you could never come up with.’
So I wrote down a single sentence: I once mopped up all the blood from a murder. I stuck my name on the top and pushed it forward.
He didn’t read it out loud, he just smiled and said, ‘Alex Crow... I thought you said you didn’t have an imagination.’
I stared right back at him. ‘I don’t.’
Bit by bit, his grin faded. Poor sod had no idea what he’d got himself into.