Review: The opposite of Amber by Gillian Phillip

April 19, 2011
The opposite of Amber by Gillian Phillip
Published by Bloomsbury
Challenge: BBC
Source: Review copy 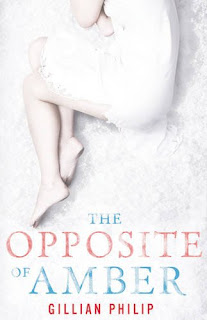 'They found the fifth girl right after the snow melted ...the place where he left her was winter water, crazed with ice-feathers and dusted with snow. The traces from her body were gone, the ones that said his name, but she had an extra skin of ice that protected her and she looked perfect, like Snow White'. Ruby and her older sister Jinn live together on their own, just about making ends meet. Jinn is beautiful, with glittering blonde hair, and makes it her business to look after Ruby. They are horrified by, but try to ignore, the local newspaper stories of prostitutes who are murdered, their bodies eventually discovered underwater. Then the no-good Nathan Baird turns up on the scene - again - and Jinn starts to change. First Nathan moves in with Jinn and Ruby, making Ruby feel an outsider, and then Jinn and Nathan move out, leaving Ruby alone. Jinn no longer has time to look after Ruby. And it seems to Ruby that Jinn herself needs looking after. Her beautiful glittering hair starts to lose its shine. And then Jinn disappears. A deeply moving, chilling, and incredibly powerful thriller that celebrates the love two sisters have for each other and mourns the events beyond their control that will conspire to drive them apart.


***
The Opposite of Amber isn't the book you think it is going to be. The synopsis on it is a little misleading in its tone and sets you up for a very different kind of read. That's not to say the read you get in the end isn't good because it is but I'm warning you now to not set your heart on the type of book the synopsis seems to offer.

The books starts with you meeting Ruby. Ruby lives with her older sister Jinn who for all intents and purposes has spend her life acting as both her mother and sister (even when her mother was alive). The pair are really close and live in a small house in a seaside village in Scotland. Everything in their shared world bobs along nicely until that is Nathan Baird turns up. He starts seeing Jinn and slowly Ruby starts to see a change in her sister.

This book is really beautifully written. It allows you to really get inside the head of the main character Ruby and you really feel for her and the situation she helplessly finds herself in. The events of the book trot along nicely and the story is really engaging but it isn't the "thriller" promised on the synopsis (and probably is all the better for not being so). The final twist at the end was good and I never saw it coming at all.

Definitely one I'd recommend but don't let the synopsis put any preconceived ideas into your head.

Check back tomorrow for The opposite of Amber blog tour where I will be revealing the next part in Gillian's exclusive blog tour story.

serendipity_viv said…
This looks brilliant, although I wish they wouldn't mislead you with the blurb.
19 April 2011 at 08:30

Stephanie (Books Are A Girl's Best Friend) said…
I started this one a few days ago and just couldn't get into it. I haven't given up on it completely though and I'll try it again soon. Thanks for the review!
19 April 2011 at 09:27

Jules said…
It is a pet peeve of mine when the blurb gives you the impression of something else.

Interesting review and one I haven't heard of before.

Lynn said…
I've read some good things about this book so I'll definitely pick it up. I'm already predisposed to like anything by Gillian Philips as Firebrand was an awesome book - in my top ten for last year! I hope this is as good.
Thanks
23 April 2011 at 13:20

Michelle Fluttering Butterflies said…
I am so curious about this now! Luckily I don't think I've ever actually read the blurb, but your comments made me very intrigued!
28 April 2011 at 08:08