Guest review: Doctor Who: The coming of the Terraphiles by Michael Moorcock

Doctor Who: The Coming of the Terraphiles by Michael Moorcock 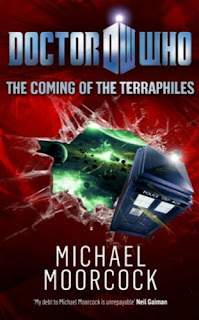 'There are dark tides runing through the universe...'Miggea - a star on the very edge of reality. The cusp between this universe and the next. A point where space-time has worn thin, and is in danger of collapsing... And the venue for the grand finals of the competition to win the fabled Arrow of Law.
The Doctor and Amy have joined the Terraphiles - a group obsessed with all aspects of Earth's history, and dedicated to re-enacting ancient sporting events. They are determined to win the Arrow. But just getting to Miggea proves tricky. Reality is collapsing, ships are disappearing, and Captain Cornelius and his pirates are looking for easy pickings.
Even when they arrive, the Doctor and Amy's troubles won't be over. They have to find out who is so desperate to get the Arrow of Law that they will kill for it. And uncover the traitor on their own team. And win the contest fair and square.
And, of course, they need to save the universe from total destruction.


Let me begin by saying I have been a fan of Doctor Who for many years - I followed the classic series and then was overjoyed when it returned to the screen in 2004. I have also read widely of the works of Michael Moorcock and have greatly enjoyed his dark surreal fantasy novels with fascinating characters, anti-heroes such as Elric and Corum. I was therefore, after my initial disbelief, very excited to hear that the BBC had commissioned Moorcock to produce a DW novel.

Unfortunately this failed to satisfy me as EITHER a Doctor Who or Michael Moorcock novel - yet alone both. Doctor Who references were minimal, while characterisation of both the 11th Doctor and Amy was poor. From a Michael Moorcock perspective there were myriad references to "the multiverse" and the battle between "law and chaos", but it was a far cry from the intelligent writing I associate with Moorcock.

The setting was comedic and nonsensical, the characters farcical and the conceptual science bizarrely ridiculous. An awful lot of time was spent playing weird sports events which the rules and terms were never really adequately defined so it was very hard to keep track of who was winning and how they were doing it.

To my mind Moorcock has taken the worst elements of Doctor Who and his own writing rather than the best. From Doctor Who he incorporated the sometimes childish plots and characterisation that is occasionally present in the series but none of the rich history that the series has established, from his own writing he took some of the bizarre conceptual theories but none of the depth of characterisation or sense of epic adventure.

I really regret that this is the case. I was looking forward to this so much.

Sally Bibrary said…
Such a shame. I love Dr. Who, and I've loved Moorcock ever since I devoured the entire Elric saga in highschool while laid up with a broken foot. I really hoped for more from the meeting of the two.
26 April 2011 at 14:00

Michelle Fluttering Butterflies said…
Not my sort of thing at all (I've just watched 5 minutes of Dr Who in my life) but I just love that you get Hadley to guest review for you. Brilliant. Wish I had that sort of resource :)
28 April 2011 at 08:16