Review: Department 19 by Will Hill 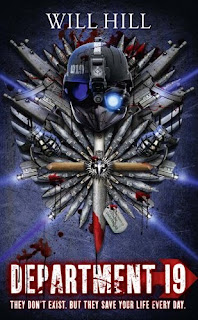 In a secret supernatural battle that's been raging for over a century, the stakes have just been raised -- and they're not wooden anymore. When Jamie Carpenter's mother is kidnapped by strange creatures, he finds himself dragged into Department 19, the government's most secret agency. Fortunately for Jamie, Department 19 can provide the tools he needs to find his mother, and to kill the vampires who want him dead. But unfortunately for everyone, something much older is stirring, something even Department 19 can't stand up against!


***
If I had to sum up Department 19 in a few words they would be these: fast paced action adventure story for boys (and non wussy girls!!) with MI5 style vampire hunters who quite frankly kickass.

I don't often read YA books aimed more at boys than girls but this book has made me think that I should do more often.

The story revolves around Jamie Carpenter, an ordinary book who has just found out that vampires exist, his late father was a vampire hunter working for a MI5 style organisation and that his mother has been taken captive by the second oldest vampire in the world. Jamie is an awesome lead character. He steps up to the challenges thrown at him, is brave and courageous (and loves his mum). I loved following his story and watching him grow within Department 19 despite the obstacles he was facing. I can't wait to see more of him in future books and can definitely see him turning into a bit of a heartbreaker.

I really enjoyed being introduced to Department 19 through Jamie's eyes and via the flashback chapters. Seeing through Jamie was brilliant as things started to become clearly and untangle themselves the deeper he got into the organisation. I enjoyed sharing in his fascination in this new world and following him as he found his place in it. I loved how the story then used flashbacks to tell more of the background to the story of Department 19. The historian in me went mad for the bits set in the late 1800s and early 1900s. I liked how the author used stories from that time like Dracula and Frankenstein and tied them into the history of his own story.

One thing this book delivers well is its action. The scenes in which things kicked off were gripping. the gadgets the team had were very cool in a James Bondesque way and certainly something that I think would draw the boys in. Even wimpy old girly me wanted to go out in a department 19 issue suit and kill some vampires with a T-Bone after reading this

All in all a stunning debut novel which was thoroughly engaging throughout. I am already looking forward to the sequel.

Mel said…
Sounds like a really good read. I've heard quite a lot about Department 19 in the last few weeks and I'm looking forward to seeing copies of it on the shelves!
1 April 2011 at 08:32

Michelle Fluttering Butterflies said…
I've heard so many wonderful things about this one, I'm really looking forward to reading it!
6 April 2011 at 14:15

Unknown said…
This isn't anything like I thought it was going to be. It sounds fun! I've got a feeling it might be a bit gruesome for me but I'm thinking my male students will love it. Thanks for the recommendation.
7 April 2011 at 16:37